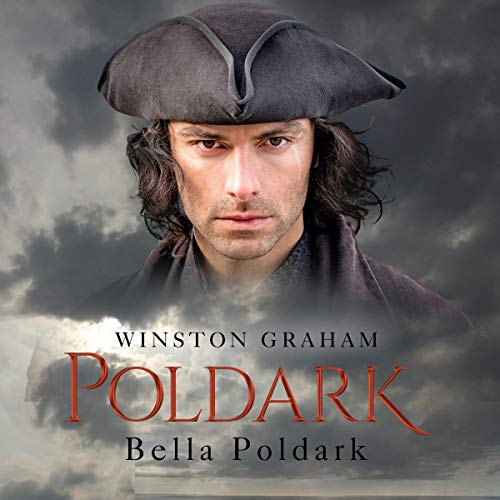 Bella Poldark is the 12th and final audiobook in Winston Graham's sweeping series of Cornwall, Poldark.

Cornwall, 1818. We continue the tale of Ross and Demelza; of the wayward Valentine Warleggan, whose existence keeps open the old wounds of the feud between Ross and George; of Bella, the Poldarks' youngest daughter, whose precocious talent as a singer is encouraged by her old flame, Christopher Havergal, and by a distinguished French conductor who has more in mind than Bella's music; of Clowance, the Poldarks' widowed daughter, who considers remarriage to one of two rival suitors; and of a murderer who stalks the villages of West Cornwall.

"From the very first lines we tingle with the sense that we are in good hands, transported by Graham's atmospheric prose back to 1818 and the treacherous coast of craggy Cornwall." ( Daily Mail)
©2017 Winston Graham (P)2017 Macmillan Digital Audio

"From the very first lines we tingle with the sense that we are in good hands, transported by Graham's atmospheric prose back to 1818 and the treacherous coast of craggy Cornwall." ( Daily Mail)

waiting for next one

loved the whole series. would love another installment. what happens to Cubby? I want more on drake and mirena too.

A wonderful set of novels

There wasn’t much not to like. The story from Book one to Book12 has been one of my most enjoyable reads ever! Superbly narrated by Oliver J Hembrough, I feel as though I have lost a family now I’ve come to the end! Amazing talent Winston Graham.

Sad that it’s over, but so satisfied!

This series of Winston Graham’s has been a constant friend for over a year. When traveling full time you can sometimes feel a loss of a permanent community, but this series has been a sort of family for me. I’ve loved every bit of it down to the very last sentence. I began to be attached to this story through the PBS Masterpiece series, but had to read the books to have more. The narrator, Oliver J. Hembrough did a masterful job to the point where the voices matched that of the Masterpiece actors so closely that I could envision the show in my head while listening. Just marvelous!!! My only criticism of this series is that it had to end. I wish it could go on, but now I’m going to go watch the rest of the Masterpiece series and see how well they follow and give honor to the books :)

I can't believe it's OVER

I've listened to all 12 books - straight through and watched the 3 seasons of Poldark. When this book ended yesterday I cried! 240 hours of being with the Poldark family ended way too soon. I wish there would have been a nice synopsis of what happened in the future to all the major characters instead of just Bella. This series could go on for a few more books - at least until Ross and Deleza die! Today I feel a homesick like feeling - the first drive to work without them in quite some time.

Hembrough is superb! He brings a good story to life. His skill with the many voices accents and language is amazing.

Almost sad to have the story end.

I have read the entire series and just couldn't wait to see what happens next.

This whole series is wonderful. The narrator makes each character distinct and recognizable, he's very good. I thoroughly enjoyed each book as well as the TV series on PBS. A+

When is the next book?

I loved this book best of all. I didn’t want it to end. I want to know about Bella and her children and about Ross and Demelza. Will there be more about little George and Henry? Will they be friends like Frances and Ross or will they be like George and Ross? Will Georgie take his rightful name Poldark?

The Best for Last!

As much as I loved the whole Poldark Series, this was my favorite of all! I just wish it weren’t the last. I was especially surprised to encounter a mystery within this story with an unwitting sort of detective.

A good ending to a great series. it managed to end with a shocker and still come out great.

I will not only miss all these characters but will equally miss Oliver Hembrough.
Thank you for entertaining me for these last months.

Tears, Fears, and many Joys. I can't help but wonder what else might have been in Winston Graham's wonderful mind in years ahead for these characters who live themselves out of the pages. Still. It's a nice stopping place.

An amazing delivery of a truly wonderful novel. I have listened to all 12 and they have been simply spellbinding.

Having just completed all 12 Poldark novels, I am, as listeners may identify with, a little saddened. Coming to the end of a series of fabulous reads comes with the realisation that in reaching the finish line, your pleasure is also at an end and the search must begin for your next focus.
Oliver Hembrough does a beautiful job with all in Winston Graham's series. His natural ability to voice a West Country accent in an authentic way is admirable and adds much to the enjoyment for listeners. The voicing of Ross and Demelza in particular is so consistently done that they become familiar friends over the course of the books. His background in the dramatic arts leads him to be able to portray the events and emotions extremely effectively. There were one or two occasions where I questioned the pronunciation of certain words in the text and similarly in the use of the punctuation to apply meaning in certain passages but these were minimal over the reading of many many chapters and that was me being picky. I did squirm at his voicing of George Warleggan for whom he chose an overly affected and smarmy voice. However, maybe, with George's desire for social climbing, he would have tried to be more affected than his high born adversaries.
Bella is a great story about the youngest and most gregarious Poldark daughter's journey to fulfil her ambition as a singer/actress of note. The listener journeys with the Poldarks on the trials and tribulations involved. The book also ties up the loose ends with other key characters and does finally suggest answers to the questions of Valentine Warleggan's parentage from the point of view of those closest to him. The warmth and realism of relationships between all Graham's characters stands out, as always, in his books. I shall miss the Poldarks but if I cannot replace them, I may need to delve right back to the start of their story as, for me, finishing the series is like missing loved ones.

An excellent conclusion to the series.

The whole series of Poldark books has been thoroughly enjoyable and goes highly recommended to anyone who enjoys historical drama.

The last and best of all 12 Poldark novels.

Brilliant listening at night - narrator’s voice very soothing when you can’t sleep and story is fantastic.

A thoroughly absorbing and interesting series

I have enjoyed every minute of every book. I've felt like I've been there following the Poldarks through their adventures.

Could listen to this all day! The end of a great series. Caught up in the events of the Polaris.

Just as Bella received her rapturous applause for her efforts on the stage, in the same vain I came to the end of the book feel the same sense of "more more we must have more".

Another brilliant installment of Poldark.

Loved it, another wonderful final piece in the Poldark saga, just sad that it's now come to an end 😢

This is the first time I have read 12 books in s series and in such a short time. I first bought the book, then bought the next three. Seeing that it is not like many other series but was able to keep the same level, I bought the next 8.

I am literally in love with Demelza and Ross and thanks to O. Hembrough who gave life to all characters

Consistent to the end

Despite the books being published from as early as 1945 and as late as 2002 I found them remarkably consistent. I only wish there were more. I think my favourites would be 'Ross Poldark' and 'Black Moon'. Book 11, 'The Twisted Sword' had some tragedies for our heroes and I hoped that the main characters would survive intact in the 12th and final book 'Bella Poldark'. It isn't the best of the series but is probably better than 'Stranger from the Sea' and equal to a number of others. It had its moments of peril, the ape story was a bit far fetched but so what. The ending wasn't at all dramatic but was gentle and appropriate leaving the remaining Poldarks to carry on their lives.I absolutely loved listening to the whole of this series and wouldn't change a thing...well perhaps Francis and his fate in the mine but Winston Graham knew best.