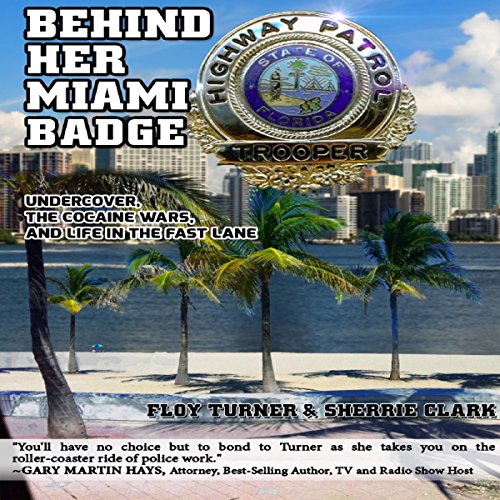 Behind Her Miami Badge

Miami's vice cops, move over. There's a new sheriff in town, rather a feisty Florida Highway Patrol Trooper named Floy Turner, who juggles motherhood with fighting crime. With refreshing authenticity and transparency, Turner doesn't hold back as she tells her stranger-than-fiction, true-to-life anecdotes of what goes on behind the badge in drug-ridden 1980s Miami when cocaine was king and her town housed one of the major drug hubs in the country. Whether it's Turner's first night on patrol facing the barrel of a gun, the bloodiest day in FBI History, hilarious undercover assignments, conversing with infamous serial killer Aileen Wournos, personally and professionally experiencing the wrath of Hurricane Andrew, and fighting the Miami cocaine wars with the DEA, FBI, and FDLE, Behind Her Miami Badge: Undercover, the Cocaine Wars, and Life in the Fast Lane is an action-packed audiobook that will bring tears to your eyes, either from laughing so hard at the humor or crying at the tragedies.

What listeners say about Behind Her Miami Badge

I was born in an age where women were teachers or secretaries or nurses. I always wanted to be a policeman much to the horror of my parents. Thank you so much for this great personal insight into being part of the law enforcement brotherhood. Loved every second of it. I want more. I did think outside the box and became a mathematician in the budding age of computers. Still wish I had been a policeman.

I was voluntarily provided this review copy audiobook at no charge by the author, publisher and/or narrator.

A brave woman caught in the fast lane

Yes, I loved the inside look behind law enforcement in a male dominated profession.

"This review copy audiobook was provided by the author, narrator, or publisher at no cost."

Behind Her Miami Badge

Behind Her Miami Badge: Undercover, the Cocaine Wars, and Life in the Fast Lane
: Floy Turner, Sherrie Clark

A brave woman in 1980's Florida beginning a career in law enforcement. Floy takes us inside a male dominated work force. The listener hears tales of discrimination, heartbreak, and humor. I enjoyed this book, finding out what happens on a regular basis in law enforcement.

The narration was well done by Lee Ann Howlett.

"I was voluntarily provided this review copy audiobook at no char law enforcement. ge by the author, publisher and/or narrator."

Behind her Miami badge

This was a nice glimpse into the life of a female Florida state trooper. I really enjoyed her accounting of her daily life on the force. At times I thought that it was a little long winded, but over all a very good read.
I received this book at no cost for an honest review

Note to Self: Don't Wear Yellow to Rob Banks

Where does Behind Her Miami Badge rank among all the audiobooks you’ve listened to so far?

This was an enjoyable listen. It was performed well. I listen to forty or fifty audio books a month. This is better than many of them. So, in the top twenty-five per cent.

Behind Her Miami Badge follows a woman's story as she pursues a career in Law Enforcement. It tells you about the rewards and the toll the field exacts personally.

Have you listened to any of Lee Ann Howlett’s other performances before? How does this one compare?

This is the first performance. The first thing when I listen to an audio book that I notice is the voice performance. Probably most people do.

My first impression, to be honest, was I wasn't comfortable with her. But, I came to feel she was a very good choice. Lee Ann has good pace, and didn't try odd deep or high pitched renditions. Or weird accents.

She added to the success of the work.

Being away from family, the rapport between the men and women of Law Enforcement and their sacrifice.

Thanks for the opportunity to review "Behind Her Miami Badge..."

This review copy audiobook was provided by the author, narrator, or publisher at no cost.

I found this book interesting in many ways. If you like true crime and want to know how police work is done this is the book for you. I want to listen to it again because I feel I missed things.

I enjoyed and will definitely relisten and listen to any similar books! great narration! Great job!

Fascinating insight to a trooper's life

This is a winning combination of a great story coupled with the perfect narration. Floy tells about her beginnings in law enforcement - 10 years as a trooper in FL. The inside look into a police officer's daily work is riveting. The personal touches about her family and her struggles as a woman in a masculine field are interesting and humanizing. I will admit that I got a little tired of Floy crediting god for what was clearly the result of her own hard work and ambition .. .but whatever... it's a 1st person narrative and that is how she sees it.

Lee Ann Howlett is the perfect narrator for this book. She is conversational and so easy to listen to. I really felt that I was listening to Floy tell me her story. Disclaimer: I received this audiobook with a promotional credit from the narrator and have been a co-narrator with her on some projects. However, I have never actually listened to one of her audiobooks before and got this one because the subject matter interested me. Finding out that Lee Ann Howlett really is THAT good was a treat.

Not Miami Vice, But Real Life

I enjoy true crime and detective stories. This book gives you a real-life look in on the life and experiences of female officer and some of her comrades. Parts of it were interesting and worthwhile, but unfortunately I found a lot of it to be hard to get through. I appreciate that the author was trying to be transparent with her job. As she stated, most of the work in the life of an officer is monotonous and boring paperwork. Not that she focused on that part of her job, just much of the book still seemed a bit trivial to me. I felt the narrator didn't really help the cause, as I thought she seemed rather bored herself.
This audiobook was given by the author, narrator, or publisher at no cost in exchange for an unbiased review via Audiobook Boom.”

Loved the full cast, the accents, the ambient sounds. This was done immersively well! The stories are captivating and exciting, and the performances catch all of the subtle nuances that come from conversations so that it didn't feel like a book reading. I definitely recommend this. -