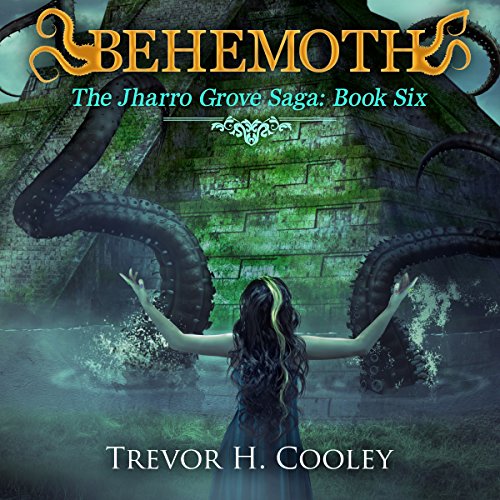 The Behemoth was created 1,000 years ago, its body stretching for miles under Malaroo's swamplands turning them into a dangerous and uninhabitable place. Now it has learned to swallow the peoples of Malaroo and transform them into its own army; a twisted mix of troll and man known as the Trollkin. It hungers to consume the power of the Jharro Grove and if it succeeds the world will be plunged into darkness.

Justan and Jhonate, forced to hold off their wedding until the threat is over, find themselves stuck between the two rival factions that are the only hope of defeating the Behemoth and its everlasting hunger.

What listeners say about Behemoth

The bowl of souls, Narrow Grove Saga was as in all of Cooley's books thrilling and compelling. This novel is like visiting old friends. You really care what becomes of them and what befalls them.

You are going to want to listen to this series.

Where does Behemoth rank among all the audiobooks you’ve listened to so far?

Well, I've listened to hundreds in several genres, so ranking doesn't make much sense to me. This series and this finale are a great deal of fun. The combination of Trevor and Andrew I can rank as in my top 5 favorites.

It was good to have so much of the Jarro Grove tension resolved in this book. There was a lot of interesting action and some awesome boss fights.

Which character – as performed by Andrew Tell – was your favorite?

I can't wait for Trevor to write his next series in this universe.

Had to be one of his best books Trevor H. Cooley is a very inspirational writer I can not wait for his next book.

these characters are addictive. Justan and his bonded have an established role but it's great to see fist come into his own. all of the budding relationships give an entirely new twist and the action along with the new races all work together to provide heart-felt and sometimes heart-wrenching moments

Best book in this trilogy

Everything just worked in this book. Naration was spot on throughout. Now I am excited about the next series...

The Behemoth is startlingly original in its concept of a larger than life foe. The vast area of swamplands allow it to stretch and grow to a titanic size, even allowing parts of it's 'body' to pop up all over the swamplands. .
Normally such a foe would defeat or devour the defending armies, however this one recycles their prey and creates a new species called Trollkin, a ready made army.
Fist and his bonded have to find new ways to fight the enemy, whilst Melinda rears her ugly head again stirring up trouble wherever she goes.
loved this book so much I couldn't stop listening to it and Andrew Tell the narrator has done another fantastic job, bringing the characters to life.
If you enjoyed the previous books in the series this one will stir your imagination and pull you into the lives of the characters.

My Thoughts:
Reading this book after waiting for so long after the last book was like meeting old friends again! And I am particularly happy to see Fist again, being his lovable ogre self! By now I am an old die hard fan of this series. And this book was a wonderful 5 star read! The down side is, that you have to trudge through previous books first to get here! And that is not an arduous task as it may sound. It has its down sides and upsides. You just have to roll with the bad as with the good. And the series has lots and lots of good reading times!

Sure, some would say that the plot is kind of formulaic, so what? It is the pleasure of reading it that matters! And it is a pleasurable read! At first I was kinda reluctant to read through the book so I only listened to it halfway through. I was reluctant because I knew this book is going to be a cliffhanger simply because every single book in this series is a cliffie. And it is kind of one, but only if you read the epilogue. Even then, it is still kind of not... This book closes 12 books worth of story and it is very satisfying! Of course I want more! So the epilogue tells me what to expect next and I very much like that, so those of you who is thinking of following this series, read the epilogue! :) Needless to say that this is the best book in the series!