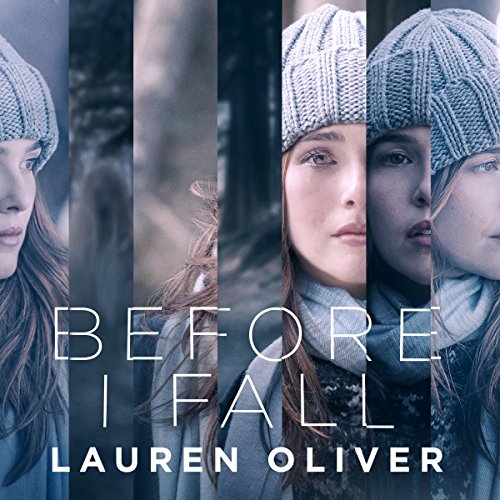 They say 'live every day as if it's your last' - but you never actually think it's going to be. At least I didn't. The thing is, you don't get to know when it happens. You don't remember to tell your family that you love them or - in my case - remember to say goodbye to them at all.

But what if, like me, you could live your last day over and over again? Could you make it perfect? If your whole life flashed before your eyes, would you have no regrets? Or are there some things you'd want to change?

What listeners say about Before I Fall

couldn't put it down

I couldn't stop listening to this. A great story. I could picture everything clearly as I listened.

The narrator is amazing

The book is really well written but the narrator adds a whole extra layer of good voice acting and feeling to it. 10/10. I'm crying but I love it.

This is the first time I've finished a whole audiobook. I enjoyed the journey and the message, although I disliked most of the main characters (which is kind of the point).
Personally high school dramas don't have the same effect on me as they used to - If I'd read this 8 years ago I would've found it much more relatable.

I decided to read this book after I watched the movie and it was the right decision because that way the movie wasn’t spoiled and the book was still a surprise. This book about teenagers, love and exploring the world is very relatable to youngsters and to adults too. The story of Sam Kingsley and her path of realisation of the right way will definitely leave anyone surprised but content. The mix of emotions that you feel towards the main character will always keep you on the edge of your seat. And those emotions can change every second, you will be angry at Sam, you will pity her but at the end you will love her. This book is one of those that connect with the reader at a deeper and emotional level, not going to hide I did slip a tear or two. Moreover, this book can relate to many different types of people... doesn’t matter who you are you will be able to see yourself in Sam’s shoes. I’m not going to say that this book “changed my life” but it definitely made me think and understand some new things about it. Will surely be one of the books on my top 10 list!

The ending really showed me and helped me with my fear that of death although I still fear. It did also bring alive again the story of youth dying but it was amazing how Sam was able to fix everything and how much she goes through the stages of grief. It was just great

Very long winded, find it hard to find time to finish the story,voice of narrator sounded annoying, but probably more because the character that the narrator is trying to portray.

Cried a few times. Such a great story.

Loved the story. The reader was ok. The valley girl voices got annoying real quick and the voice she chose to use for Kent was a bit annoying but other than that it was so good. Towards the end it got so good I had to spend hours finishing it.

Another gem from Lauren Oliver

What did you love best about Before I Fall?

The realism of the characters and the growth and development of the protagonist during the story.

It's something anybody can relate to having been in high school. Most people would fall into one social category and identify with the protagonist by either being LIKE her or being around (or victimised by) someone like her. This is the story of is like watching Mean Girls through the eyes of one of the plastics- but with her growing as a person and realising that maybe the way she behaves isn't perfect.

Sarah Drew is flawless in any of the books she reads. Being an actress, she's really expressive and able to get the inner feelings of the characters out for you. She has a "voice" for every character that is distinctly different or at least different enough that you don't get confused in moments with a lot of dialogue.

I really identified with one of the characters who is bullied a lot, and there's also a scene in the toilets with a "not cool" girl that makes a big impact. I can't give away too much without spoiling it, really.

This is a must read for high school age kids, parents with teenage children or people who (like me) really like intelligent YA fiction or the writing of Lauren Oliver. Once you get over the initial chapter of the story (which makes it seem like a happy-go-lucky story from a tween movie until the plot takes a sudden turn) , you will be hooked and unable to stop listening.

when the narrator speaks in someone else's voice it made me cringe so bad omg. The main character and her friends are annoying, the book is so idiotic, dumb and childish with ofcourse a forced love story

The story captivates you from the start, capturing the horror of bullying and what one person will do to save another. Excellent read

Good story, but I didn't like the main character to much

I decided to listen to this book because I thought the idea was intriguing and I definitely enjoyed the plot.
However I didn't like the main character. She annoyed me most of the times which is unfortunate when a story is told from the first-person perspective... Some people would maybe argue that she might not have been likeable in the beginning but then evolves, but it takes her very long and even in the end she wasn't really my favourite.
Some voices were a bit over the top, but apart from that the reading was good.
Overall I did enjoy the story. I might not listen to it again, but it was worth the time.

Some reviews mention that the character is an awful person- completely missing that that is the entire point, and further encouraging a standard, bland protagonist with no personality. This book is easily one of my favourites, the author manages to perfectly illustrate this surreal experience, keeping me entertained throughout. it's funny, frustrating and insightful. a must read. I read it as a book first and couldn't put it down. the reader definitely does the book justice.

I loved it. The characters were gripping. The ending was unexpected. A must read. Really good morals

Drags on and on for what seems like forever

a cross between grounding day and the butterfly effect. couldn't wait to get to the end of it, the story drags on.

This book was amazing in all ways and Sarah did a fantastic job of narrating with her voice changing for the characters and she was great for getting the tone right with all positions needed in the book. This is one of those books that will stay with people after listening/reading.

Narrator did great for a teen story. I'd heard this book was inspiring, but there was no twist, no revelation, no excitement, and I was bored.

It's truly a beautiful book. You'll cry and laugh and hopefully fall in love with Kent. It's a perfect story and really eye opening. I'm gonna to re-read it forever. Sad though

I watched the film and I just wanted to know how the book panned out. It was honestly so real and relatable. A few tears but other than that it is an amazing thing to read/listen to! Would recommend!!