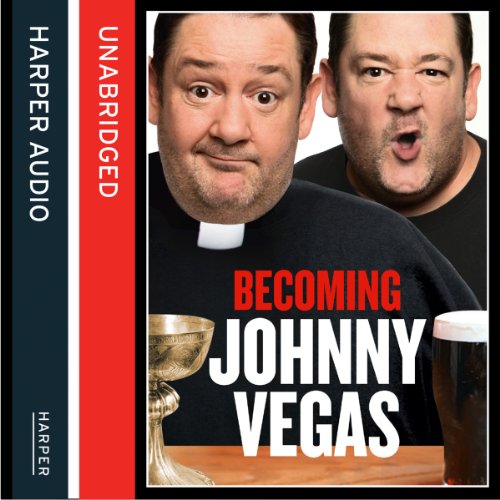 ‘My name is Michael Pennington, and I am not a comic character. I'm often mistaken for one though. You might know him by another name. Johnny Vegas.’

From BBC Dickens adaptations to Benidorm and Ideal to the PG Tips ads, Johnny Vegas has become one of Britain's best-loved comic actors. But before he'd ever drunk tea with a knitted monkey or made himself the exception that proves the rule in terms of the predictability of TV panel game regulars, Johnny Vegas was perhaps the most fearlessly confessional stand-up comedian this country has ever produced.

How did an eleven-year-old Catholic trainee priest from St Helens grow up to become the North West of England's answer to Lenny Bruce? That's just one of the many questions answered by this eye-poppingly frank memoir.

Becoming Johnny Vegas establishes its author as the poet laureate of the Pimblett's pie. Once you've finished this darkly hilarious tale of family, faith and the creative application of alcohol dependency, you'll never look at a copy of the Catholic men's society newsletter the same way again.

"This man is one of the true comic greats" ( The Guardian)

Definitely worth getting to know the real man behind the madness of Johnny Vegas.

What made the experience of listening to Becoming Johnny Vegas the most enjoyable?

This is, without doubt, the most enthralling and entertaining book I've listened to in years. I've a new found respect for Johnny, or rather Michael. The convergence of the characters, the full gory detail of the development of Johnny is intoxicating.

The Dr Death character is spine chilling and beautiful in equal measures.

Funny, sad and concerning but above all expertly crafted and wonderfully narrated.

What made the experience of listening to Becoming Johnny Vegas the most enjoyable?

I am not a fan of Johnny Vegas the comedian. I like Micheal Pennington the actor - I like him in Ideal and Benidorm so I wasn't sure I was going to like this book - quite the opposite I loved it. The book is very honest. So much so that some parts make you cringe - but this is what makes this book special. He does not hide the tough times, the embarrassing times and the times where he messed it up, he doesn't sugar coat his experiences or make excuses for what he grew up to be. This makes it a rare insight into the person behind the persona. Most would hide this and it needs to be commended for being so open.

What was one of the most memorable moments of Becoming Johnny Vegas?

The experience late at night in the priest school........

What does Johnny Vegas bring to the story that you wouldn’t experience if you had only read the book?

This is a good book- This Guy can write

Where does Becoming Johnny Vegas rank among all the audiobooks you’ve listened to so far?

When I first started to listen I was thinking "oh here we go this is a book giving excuses for the appalling behavior of the author". It is not at all. It is an incredible perceptive honest and very real account/ insight into an alter ego who was enabled to go wild. I had not really been exposed to Johnny Vegus as a stand up comic and know him for more of his serious acting and directing. It was fascinating and terrifying to get an insight into how Johnny came about and how two very different personalities could co exist and co depend. Mr Pennington is a clever ingenuous writer and manages to put this memoir together with huge skill.

What does Johnny Vegas bring to the story that you wouldn’t experience if you had only read the book?

If I had read the book the true natures of both Johnny and Micheal may not have have been so succinct. Listening to the author tell his own story's and often switching to a different person made me understand just were he was coming from.

Having not known Johnny Vegus as a stand up this book did make me realize just how bloody funny and amazing he was.

Funny and touching in equal measure

Would you listen to Becoming Johnny Vegas again? Why?

I would certainly listen to this again. It was funny, touching and full of insight and humanity.

Which character – as performed by Johnny Vegas – was your favourite?

Great insight to how Johnny Vegas developed. The sexual enlightenment stories were amazingly honest. We did get a warning to skip that section, however!

boring and not funny at all, much better ones on the market right now 1

I just cannot listen to anymore of this book, thought things would improve, but just got worse. Which is disappointing.

I'm a fan of Vegas and was interested in his back story. I wish I hadn't bothered. He pains over his unremarkable childhood for most of the book and Labours over his his awkward adolescents in almost crying tones for 20 or so chapters. the last five chapters are superb. A real insight into the struggles and conflicts of artist and dominant character.