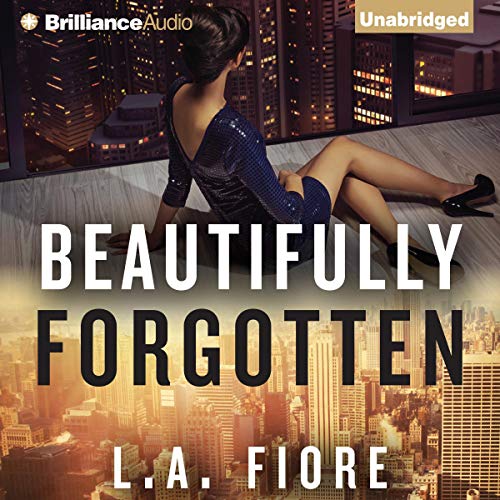 By: L. A. Fiore
Narrated by: Amy Rubinate

Successful restaurateur Lucien Black’s blue-green eyes and unattainable attitude drive women wild. But his abandonment issues and criminal past have left him emotionally closed off. When a familiar face shows up for a job interview at his nightclub, the ache he has tried to forget tears at his heart - it’s the girl who once healed him...and then abandoned him.

Darcy MacBride still remembers Lucien’s delicate touch when they were both wildly in love teenagers. His gorgeous eyes had soothed her hurt after she’d been dumped off at the orphanage where Lucien lived. Darcy felt his jagged edges fit perfectly into her own, and she’d planned to spend the rest of her life with him - until a mysterious man warned her away. Now, fourteen years later, she’s ready to endure the torture of Lucien’s indifference and having him as her boss...just to be near him. But when it seems that they might finally take up where they left off, a devastating secret buried in their past threatens to tear them apart again.

What listeners say about Beautifully Forgotten

I was excited to have trace and ember still prominent I luck en and darts story . I loved how all the twists and turns connected and kept me listening. still have damaged as my favorite but I'm ready for number 3

I can't believe how this story started an ended a lot of info!! It was well delivered an I'm truly excited about this author she gave her all into this! She will be a fantastic author! I hope an wish for a book 3!! It would be well worth it! Hand down to this great author!!

What a great addition to this series. I really enjoyed this book even though it made me cry. I think a book that is so well written, that the reader or listener can become a part of it and "feel" the emotions of the characters is a book that needs to be shared with others. This is why I recommend this book. The series is not coming out very fast or audible is not getting them, I do not know, but this is a series that will be read often. A must for all wishlists.

WOW L A FIORE HAS PACKED A LOT INTO THIS STORY

Lucian is sexy, rich, gorgeous, successful, a womaniser and has a heartbreaking past because the love of his life, Darcy, devastated his life when they were in their teens. Now decades later, she's trying to make amends and hoping for more but he just wants revenge….. that is until he sees her.

First there's angst, then the chemistry kicks in between them, followed by forgiveness, sex, understanding, character development and finally a deep love. But along the way are terrible heartbreaking secrets, treachery, murder, plot twists, Ember and Trace's tearful sub story that has some trauma filled parts, shocks and surprises and lots of secondary characters. The romance built at a nice pace and then together they faced all the unfolding never ending dramas.

Best listened to after Book 1.

Worth a credit? It was a well written and enjoyable bitter-sweet love story that kept my attention as I was happily entertained for nearly 10 hours and it was only $7.34, yes $7.34… what a bargain so no need to spend those precious credits (but if I had then I would still be one happy listener).

A Caterpillar turns into a spectacular Butterfly!!

This is a very emotional listen full of soul deep love, mystery, action and loads of hot sex. This story will stay in my soul for a long time and i so hope there will be many more books to come in this wonderful series... :)

I have been a fan of L.A Fiore’s ever since I read Beautifully Damaged. When I learned that there was going to be another book in follow-up, I shook my little ass in a happy dance and pumped my fists in the air in excitement. I absolutely adored Beautifully Damaged and couldn't wait to get my hands on Beautifully Forgotten. This book picks up shortly after BD finishes – you could probably muddle your way through it without reading the first one, however I don’t recommend that. To truly appreciate this story, you need to hear it from the beginning...

Lucien and Darcy are on a path of re-discovery with each other. The more time they spend together, the more they come to see that they want to get back what they once had. Unfortunately, the same forces that pushed them apart want nothing more than to make sure things stay that way. Permanently. L.A. Fiore spins a tale of deceit and betrayal that spans generations. Each one is more complicated than the next and packed with more shock value than I knew how to handle...

I loved the story but there were so many names and characters and the voices all sounded the same. I can’t be positive but I even think that there were a few places that either the writer or the performer had the wrong name. Lots of twists in the plot line and loose ends to tie up in the end.

I downloaded this book immediately after I had listened to Book 1 in the series. It is not a stand alone book by any means. I also enjoyed this although there was so much going on at times I had to stop to figure things out in my head. I already have Book 3 in my wish list!

I love Fiore's books! I can't describe the emotions I have felt listening to the heartbreakingly beautiful love story of Lucian Black and Darsey. I loved the part of them reuniting with their son😭❤️ The story continued for Trace and Amber and I have to say I really loved the fact it included them, it felt like a beautifully strong family story. All the twists and character development were really interesting and capturing. The story of sister Ann made me cry, Dane's story as well was a good example of how things are not what thy always seem. The old grumpy sister Margret was hilarious.

Love you L. A. Fiore for always bringing beautiful back❤️

Great story but very hard to keep up!

So many twists and turns I got lost. So much sex I literally got bored with it! That is saying a lot! I had to roll my eyes at the feeling of reading the the same scene over and over. I almost didn't finish this book but like a sucker I had to see how it all played out. Kind of pissed that there was unfinished business but I guess the author is probably using that to lead in to the next book. I think I'll pass on the next one since this story is too exhausting to keep up with.

I really loved the story and I really liked how the story continued with the characters from the previous book in the series it was different from other series I've read I felt like everything was connected in the perfect way yet it kept you in suspense if what came next like watching an actual movie... This series is a must read!!!!

Honestly I loved the first book and hated the second. Jumping around back and forth in time made it confusing. Jumping around between main characters kind of made both groups of characters stories reduced. To me it diminshed the new love story of Lucien and Darcy, and made the continuation of Trace and Embers love story less as well. Way too many happy coincidences and lucky turns and almost felt like the author threw every known love twist and turn into the story. I finished listening to the end only out of love of the first book but it makes me afraid to attempt to pick up the third book. It was nice to find out what happened to Trace and Embers but I kind of feel they should have just had another story all to themselves.

A lovely follow up to beautifully damaged. Although a brand new story it continues with the lives of the characters from the first book and although you don't really have to it works better if read in order. A story of love and lose and second chances. Everything you need in a good story. Would highly recommend, enjoy.

Amy is a brilliant narrator love her.