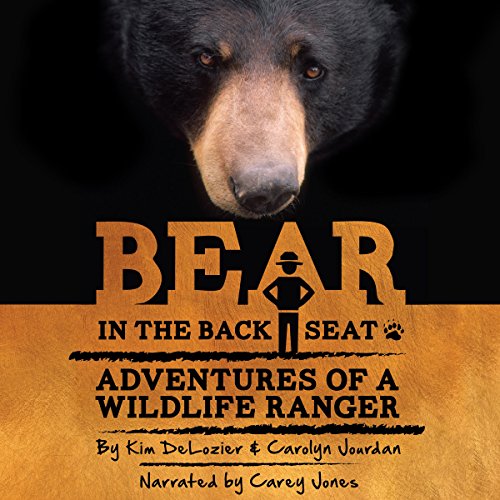 Bear in the Back Seat

Bear in the Back Seat

This is the first volume in a series of true stories from "[a]n extraordinary landscape populated with befuddled bears, hormonally-crazed elk, homicidal wild boars, hopelessly timid wolves, and nine million tourists, some of whom are clueless". In Kim DeLozier’s world, when sedated wild black bears wake up unexpectedly in the back seat of a helicopter in mid-flight, or in his car as he’s driving down the highway, or in his office while he’s talking on the phone, it’s just another day in the park. You’ll love seeing Kim and a fellow ranger tested as they bravely take on the task of relocating 77 live skunks by sedating them with darts from homemade blowguns, especially when the pickup truck load of stinkers wakes up while still in transit. A hilarious, heartwarming, and heartbreaking memoir by the chief wildlife ranger in the number-one most popular family vacation destination in the USA, the Great Smoky Mountains National Park. For over 30 years, Kim DeLozier acted as a referee in the wild, trying to protect millions of park visitors from one of the densest populations of wild black bears in America - and the bears from tourists who get too close. Written with Wall Street Journal best-selling author Carolyn Jourdan, who has several highly-regarded number-one Amazon best-sellers about the Smoky Mountains and Appalachia.

Funny stories - But not as funny as I expected.

I live in the mountains in Colorado and bears are a common sight in our little town. Those of us who live with wildlife know how unpredictable they can be and live our lives accordingly. I am always shocked by stories of people who approach the wildlife in our National Parks. It is astonishing that people do not understand the dangers.

Having said that, I expected this book to be funny rather than shocking, based on the publisher's comments. It is funny. The stories made me smile. But it isn't as funny as I expected. The lessons that this wildlife ranger tries to teach are reiterated with nearly every story and I started to feel as though I was being lectured rather than entertained. In fact, it didn't even feel as though the reader was being taught, after reading the moral the third time. Honestly, I believe that those who choose to read this book probably already understand the seriousness of the issues and could be told once or twice at most and have taken the lesson onboard. I really wanted more humor and less moralizing. I also wanted the stories to be more unique, one from another. I think, perhaps, the book would be better if he included fewer stories and gave them more attention.

The narrator has a deep, silky voice and sounds exactly the way I picture this type of man to sound. Strong, outdoorsy -- based on this voice I picture someone who looks like Sam Elliot.

If any of you are of an age to remember Disney nature programs from the seventies, and you loved them as I did, this book and narrator will make you very happy.

Where does Bear in the Back Seat rank among all the audiobooks you’ve listened to so far?

This was an enjoyable trip into the woods with the ranger I enjoyed the description of the area, having been there myself. His experiences were humorously told. My brother recommended the book. I really enjoyed it

This is a glimpse into The little-known the world of the wildlife management Ranger in the Smoky Mountains national Park. The anecdotes are many and very interesting and provide a glimpse into this world of nature that not many are privy to. I learned a lot from the book but unfortunately the narrative and the presentation was very very dry. The stories which could've been presented in a very exciting way became almost mundane and even bordering on boring, I am sad to say.

Sometimes you think people surely have better sense than to try to "feed the bears" within reach but I have personally seen mothers dragging their children, running after a sow and cubs to try to feed them potato chips from a bag they got out of their car.

I really liked this book because the Smokies was a popular place for my family to vacation when we were growing up and most of the places mentioned in the book I was familiar with. We never camped out because my Mom was not comfortable sharing space with the larger a more powerful animals at night and since she was travel director in the family, Daddy went along with this decision.

Interesting book if you want to know what the pre-Dollywood days were like in the Smokies.I have a lot of respect for those who deal with the animals and tourists in our National Parks. We need to value both the officers and the animals more.

All the Bear Facts

Filled with funny and sobering anecdotes, Bear in the Back Seat does more than chronicle the life os a wildlife ranger in the Great Smoky Mountains. It promotes environmental awareness and serves as a cautionary tale and highlights how tourists endanger bears' lives by intentionally feeding them or selfishly leaving their garbage behind. The story of Brutus is one of the all-time memorable animal stories.

As an East Tennessee native, I enjoyed listening to stories about places that I have grown up loving. This book is hilarious, and leads me to wonder what other hijinks has NPS employees been involved in. Well written and well read.

Carey Jones narrates these stories superbly!
I had no idea there were so many bears in the GSMNP and the tips he gives to anyone going there are priceless.

Interesting but more very redundant.
Would have liked more information about the author's character. Feels like the story was cut up and jumbled together.

Wonderful book! I will listen again!!!😀gave as gifts. Family enjoyed it.
Bought the books and hope they soon come out with his second book on audible.