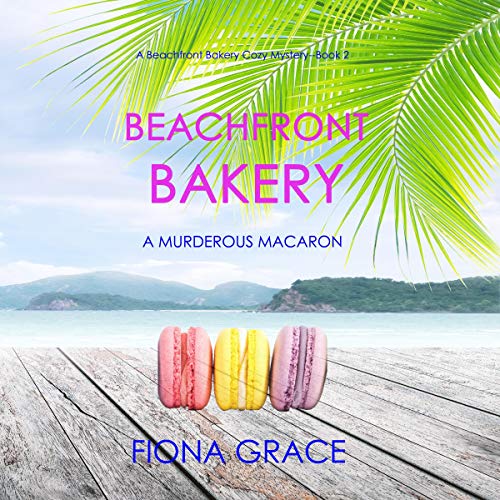 Beachfront Bakery: A Murderous Macaron is the second book in a charming and hilarious new cozy-mystery series by number-one best-selling author Fiona Grace, whose best-selling Murder in the Manor (A Lacey Doyle Cozy Mystery) has nearly 200 five-star reviews.

Allison Sweet, 34, a sous chef in Los Angeles, has had it up to here with demeaning customers, her demanding boss, and her failed love life. After a shocking incident, she realizes the time has come to start life fresh and follow her lifelong dream of moving to a small town and opening a bakery of her own.

Allison, forced to clear her name and salvage her customers, has no choice but to retrace the victim’s foodie trek up and down the boardwalk, and to figure out what he ate - or who he insulted - that could have gotten him killed.

With her beloved dog at her side, it is a race against time to crack the mystery and solve the crime before she loses her bakery - and her budding romance - for good.

A hilarious cozy-mystery series, packed with twists, turns, romance, travel, food, and unexpected adventure, the Beachfront Bakery will keep you laughing and resisting the pause button late into the night, as you fall in love with an endearing new character who will capture your heart.

What listeners say about Beachfront Bakery: A Murderous Macaron

There are two books in the series so far and I have read both. The narrator irritated me from the first moment when she couldn't properly pronounce "macaron" and the mispronunciations are sprinkled throughout the book. I find myself repeating phrases with the stress appropriate to the intended meaning of a phrase. As for the book itself, I found the protagonist's way of jumping to conclusions without thinking things through difficult to listen to and will most likely not continue with this series.