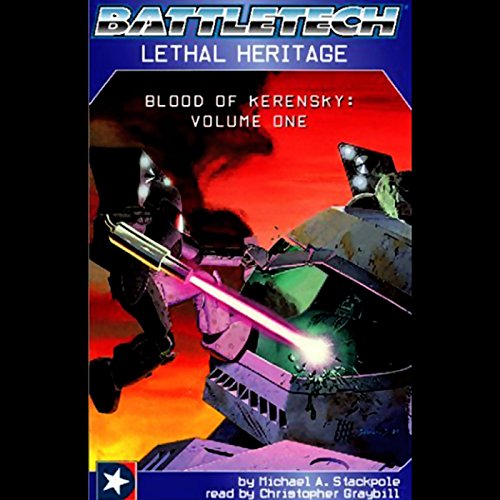 By: Michael A. Stackpole
Narrated by: Christopher Graybill

The year is 3030. For the past 300 years, since the Star League collapse and the rise of the Five Successor States, these mortal enemies have fought over space, land, and politics. But a new threat looms just outside the Inner Sphere. The descendants of an old Star League general, the Clans, bred to be the best military force humanity has ever seen, have come to take what they believe is rightfully theirs.
Don't miss the rest of Battletech.
Also, you can get all of the Battletech: Blood of Kerensky collection!
©1989 WizKids, LLC (P)2002 Listen & Live Audio, Inc. and the Cutting Corporation, Inc.

What listeners say about Battletech

this audio book is missing key chapters from the hardcopy, it is also missing sentences from chapters so it doesn't make sense

Incomprehensible if not a Battletech veteran

synaubrey: You get your wish.

I've never read any of the Battletech series. I grabbed this selection (the collection) because Defiance Audio was the producer and I loved what they'd done with the Deathstalker series. I'm a serious audio-book "reader" (I used to work in the industry); I own well over 500 and have read far more, around 2-4 per week. With that having been said, I'm REALLY disappointed.

The narrator is decent, the production is quality, but the plot is so severely abridged that it doesn't make an ounce of sense. Think in terms of the way the later Harry Potters and Eragon translated into movies: no exposition, rising action, denouement. Just action sequence after action sequence with nothing tying them together, no back-story, no character development, nothing. I've no doubt that they hit every major plot point in the book, but they don't relate them to anything, even each other.

Further, I can't help but believe that this is not the first book or story-arc in the series, so what little plot is exposed appears to simply pre-suppose the reader already knows what's going on. I'm a little over an hour in, I haven't the foggiest clue what anyone's motivations are, why characters are being beaten up for their professions, why these big power-armors are blowing one another up in asteroid fields, why it's significant that Character A is in a wheelchair or that Character B is joining some "Prince's Guard" (or even what said guard IS).

I give up. This abridging editor should be shot. I can list the number of audio books I couldn't finish on both hands (and with my count, that's saying something), but this is garbage, plain and simple. The book may be amazing, the series grand, but you'd never know it from this example. If you like high-quality sci-fi, go get Richard Morgan's Altered Carbon or Simon Green's Deathstalker, but pass on this one. Maybe if they re-release unabridged.

If you read the book first you will be fine

I have every Battletech book written. I like the universe that has been created. I was very excited to see Audible had a great Battletech series for download. I do however like unabridged stories. I was happy with the narrator, he did a fine job, I was also happy with the production,some sound effects and scene dividing music.

I however was not happy with the way they chopped the story. In my view they left out parts of the story that would be critical to explain the motivations of the characters. They also did not try to explain how the mechs worked, or even really what Mechs were.

I would be very interested to see hat a person new to the story, storyline would have to say. If Audible could get the Battletech stories unabridged I would buy them all. IF youare looking for a short piece to listen to, that does not require a lot of thought by all means get this audio book, but do yourself a favour if you like it... go buy the print edition and read that.

With MWO coming out soon, my mech passion was running hotter than an AWS-8Q after an alpha strike. I was looking forward to revisiting this series, but having trouble finding them in print I turned to this audible version. Poor decision.

The abridging in this series is awful. The vast majority of character development, lore, and political intrigue has been removed. Battle scenes are well done & Christopher Graybill does an outstanding job, but in the end it's just a black & white pencil sketch of this fantastic universe.

Off to the library for me!

Has Battletech turned you off from other books in this genre?

No more abridged versions of audible books for me. Sadly, at the moment that means no more audible Battletech.

The battle scenes on Twycross were okay.

Loved reading these books years ago and was disappointed by how much was missing from the story. It would be acceptable if it were to make the books more accessible to people new to the series but, most of the character development and word building is chopped out and all that is left are action scenes. Please Audible produce an unabridged version of this series!

abridged this book is ruined, have read the actual book several times and absolutely love it. Dont waste any money on this series here, buy the paperback and do it old school. If I could get a refund of all 3 in this series I would. on that note alot of the Battletech books have been abridged and would be a huge waste of money

Not the full story. Buyer beware

This audiobook is an abridged version of the novel. I was skeptical at it’s length of three hours. A lot of detail was left out. This contained the main events which took place in the story and did a poor job connecting those events. I found myself constantly rewinding to see if I missed something or had somehow skipped ahead. I came to find big parts of the story are missing. I’ve been finding a lot of false advertising lately. Advertising this audiobook as the novel it excerpted is a crime. It was more of a bad movie script reading or radio drama. The performance was exceptional. I kept asking myself how did the story get here? How did this happen? It’s because those parts were left out. This audiobook should be about 12 hours long, minimum. I’m glad I found this for $4 and didn’t pay $20. Having not read this novel in many years it was a nice refresher of the story’s main points. If you haven’t read the novels in the Blood of Kerensky trilogy or the Twilight of the Clans series I recommend skipping the audiobooks. Instead read the books. At least until the full book is read and put out in audiobook format. Even after wasting $4 on this version I would still pay $15-$20 for the full version. Thank you for reminding me I’m usually correct in my assessments of things. And thank you for the reminder of how people everywhere like to cut corners and take peoples money for an inferior product. If more people who know would stand up and let everyone know about things like this the world would be a better place.
Either few people review audiobooks or the written reviews are hidden. I tried finding reviews which stated whether or not this is an abridged version. Which is what I suspected from the beginning. I found no reviews. Anywhere.

Love the return to my Battletech fandom days. Not a horrible performance but low budget as you can expect with the title and age.

the perfect intro to the world of mechs

it's cheesy, melodramatic, and metal. the acting and sound effects are so low quality that it's good! this book is all killer no filler.

While I enjoyed this audio book, much of the world building and character development seen in the print edition has unfortunately been cut to keep runtime down. The core of the story remains, but much of the flavour is missing.

Good Telling of the Clan Invasion

I read this book years ago. Well narrated, nice effects. Audio quality could be improved though. Enjoyed it.

For me, the performance was marred by intrusive and overly loud special effects. They would, at times, drown out the narrator.