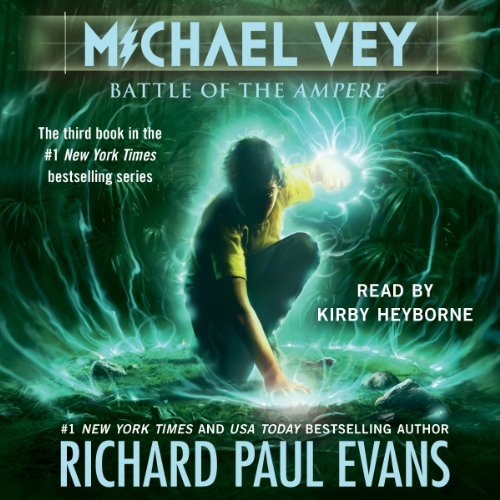 Battle of the Ampere

The hair-raising action continues for Michael Vey in this charged third installment of the #1 New York Times best-selling series.

In the third book of the electrifying Michael Vey series, Michael and his friends must continue to fight the Elgen and try to disrupt their plans to rule the world.

What listeners say about Battle of the Ampere

What did you love best about Battle of the Ampere?

The series builds upon each other with just the right amount of suspense & adventure for a family to enjoy together. This (series) should be made into a movie.

The ending- the electro-clan is back together and going off to a new adventure!

What aspect of Kirby Heyborne’s performance would you have changed?

This narrator did not have the range as the previous narrator for the other 2 books- made it really hard to adjust to especially at first when you are "used to" other voices.

Disappointed in the Narrator

When a series has a good narrator, it is just not wise to change. The narrator for the first two books was just GREAT. I felt he was Michael Vey, his voice was just perfect, he struck the right note—youth coming of age. Very, very, very disappointed in the new narrator. While he has good alternate voices, his main delivery is flat and uninteresting. The book is worth reading, but the narration rather spoiled it for me.

Michael Vey, because he is has a good character.

Who would you have cast as narrator instead of Kirby Heyborne?

The first narrator who read books one and two.

If you could sum up Battle of the Ampere in three words, what would they be?

The morals within the story

Why was a new narrator used for this book? The new narrator was such a disappointment - while he used nice foreign accents, there was little distinction among the main characters.

the breakup of the Fellowship

Long story for small plot and predictable ending too. They decide that the way to kill Hatch is to blow up his boat. But half the kids are tired and want to go home and return to their normal lives. Um..., oh yeah, the Voice will help them with some sort of witness protection program. so much for normal lives. I was telling them all through the book that there was no guarantee this plan would kill Hatch, and isn't he surrounded by all those other El-kids who are pretty powerful? In the end, it all worked out too, too smoothly, and predictably (think Han Solo) with SPOILER: no help from those evil Els.

There is altogether too much shouting and yelling for people who are trying to stay under the radar. This is not the narrator's fault; it is written into the scenes.

Lots of crying. Lots of goodbyes. We have to hear each kid say good-bye to each other kid. Wow, that got long. And lots of he said, she said, she said, he said. And then whenever Jack has a question, it gets hard to pronounce "Jack asked" without turning it into something else.

And those Peruvian natives? The Amakara? No such tribe. Which is all for the good since they speak Chinese. Explain me that.

I love Kirby Heyborne, especially in Heft, and here he does well with the adult voices (but not the South African accent). His kids voices are not good though. There is virtually no distinction among them all.

Nevertheless, it is hard for a third book to be as good as the first ones. This is youth fiction, and it does its job.

Not my Favorite of the Series

Would you try another book from Richard Paul Evans and/or Kirby Heyborne?

Yes to both but not in this series if I can help it.

Hmm...I had a hard time following along due to the narrator change. I felt like this book fell flat for me.

Who would you have cast as narrator instead of Kirby Heyborne?

The original narrator, Fred Berman. Don't get me wrong, I LOVE Kirby Heyborne as an actor & narrator for Orson Scott Card's Pathfinder series, but in this situation it was almost setting him up for failure. How could he possibly make it work? He does honorably with the accents & what not but I have fallen in love with the way Fred Berman portrayed all of the characters. I miss them all...especially Austin! Bones!

Do you think Battle of the Ampere needs a follow-up book? Why or why not?

It will have one. I felt like there were a lot of unanswered story lines that just sort of popped up and faded out without resolution. Like the Zeus/Tessa story...why did he stop talking to her?...or where the other Electric children went during the end, etc. I'm not sure if it was story or narration or an amalgamation of both that just kept me feeling lackluster about it.

What made the experience of listening to Battle of the Ampere the most enjoyable?

Richard Paul Evans is on a roll! I have read and listened to Michael Vey Prisoner of Cell 25 and Rise of the Elgen. The whole family loves this series and Battle of the Ampere does not disappoint. Action packed and full of life lessons this is a great series for young people or the young at heart. I am proud to be called a Veyniac.

Michael Vey is my favorite person in the books because he has respect for his elders, Yes sir, no sir and calling all adults by Mr. or Mrs. shows that he was brought up by a loving and respectful parent. With all he has been through and is going through it would be easy to become bitter and angry but with the love of his friends he just keeps going.

Would you listen to another book narrated by Kirby Heyborne?

While the narration was good, I didn't think he had the full grasp of the characters and range of voice that Fred Berman had on the previous books.

Yes. I tried too. ultimately it took me 4 tries to listen to it all.

I would 5 star it fully if Fred Burman read this, if you are making a sequel of audiobooks, DONT CHANGE NARRATORS.

When a good narrator brings a character to life don't kill it by changing narrators. Thats no disreapect to Heybourne. He does not tell the same story as Fred Berman...

I love Michael Vey, read the books once and decided to pick them up on audible too. I loved Fred Berman but Kirby really didn't connect to the characters well. Always felt like he was confused or bored as Michael and he really could not decide on a tone for Jack. I should not be thinking I'm hearing Taylor's voice only to hear "said Jack" at the end of the sentence lol...

the only thing I dislike was the narrator change. I would have stopped the series but they bring the OG voice actor back after this book.

What disappointed you about Battle of the Ampere?

This is the third Michael Vey book. I enjoyed the other two and could not wait to find out what heppened to the electro clan.
This book started ok, and stayed ok and i got bored. No other way to put it bored and it did not excite me. I could not care what happeded to anyone in the book. There was no real pace to the story and it did not have the same feel as the first two which were great.

Kirby's proformanec was not great.

If you could play editor, what scene or scenes would you have cut from Battle of the Ampere?

I would hand the book back and say this is a good start and needs life and drama. It have no life and no drama

I am very disappointed in the book. I wanted to like it. I could not.