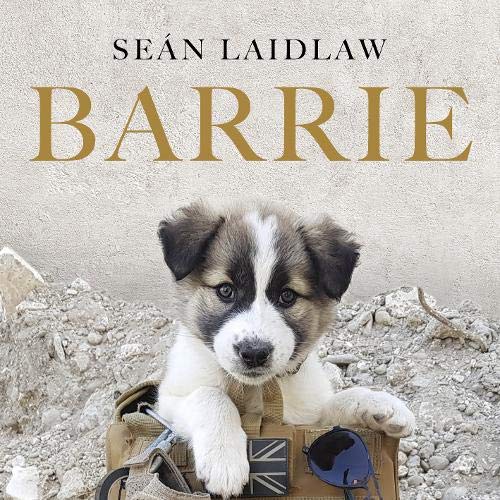 The heartwarming story of Barrie, the stray puppy rescued from the rubble in Syria by former soldier Sean Laidlaw.

Barrie was rescued from the rubble by bomb disposal expert and former soldier Sean Laidlaw. He gradually gained her trust, and they soon became inseparable. When Sean's contract to Syria was not renewed and he could not return to her, he raised the funds to bring her home with him.

The two created an incredible bond in their three months together, and they were reunited in emotional scenes in early November. Sean credits Barrie with helping him with PTSD, and Barrie has been rescued from a life on the streets in war-torn Syria.

What listeners say about Barrie

Thai book had me laughing, welling up at points and overall seemed like it lasted a quarter of the time it did due to being so addictive.

So descriptive I could virtually see the environments that were described. 5 stars....awesome!

BE PREPARED FOR AN EMOTIONAL ROLLER COASTER

What an incredible story by someone who has been there done it and got the TEE SHIRT.
Thank you Sean for taking me through your experience.

It’s hard to know where to begin with this review..to say it’s “real” and heartfelt would be like saying little puppies are cute and cuddly lol. Well of COURSE little puppies are cute and cuddly but to read about a man and dog’s life, love and connection and to feel so much better for it...well that’s just the tip of the iceberg as far as this book goes.

Sean has taken a story of man meets dog, man rescues dog and dog rescues man and turned it into a memorable, illuminating and heartfelt account which is as informative as it is inspiring.

This book will stay with you long after the last page. And if you’re reading this Sean and Nettie, congratulations! and well done! You guys are pawsome 😆😆

I loved listening to this great story, Didn’t want it to end!
Would make a brilliant Movie!!

Must have everything you want from a true story! Laughter, tears, shock and a happy ending or new beginning...