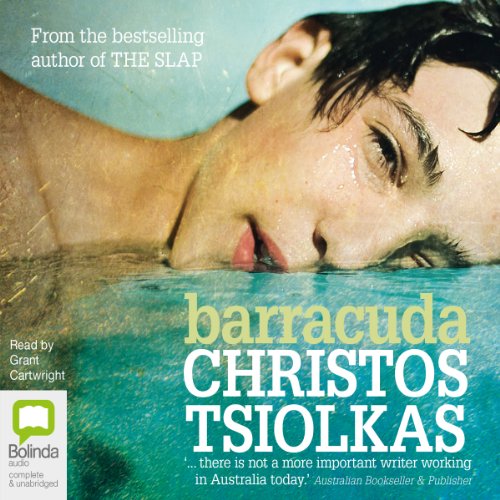 Shortlisted for the 2014 Indie Awards

He asked the water to lift him, to carry him, to avenge him. He made his muscles shape his fury, made every stroke declare his hate. And the water obeyed; the water would give him his revenge. No one could beat him, no one came close.

His whole life Danny Kelly's only wanted one thing: to win Olympic gold. Everything he's ever done, every thought, every dream, every action takes him closer to that moment of glory, of vindication, when the world will see him for what he is: the fastest, the strongest and the best. His life has been a preparation for that moment.

His parents struggle to send him to the most prestigious private school with the finest swimming program; Danny loathes it there and is bullied and shunned as an outsider, but his coach is the best and knows Danny is, too, better than all those rich boys, those pretenders. Danny's win-at-all-cost ferocity gradually wins favour with the coolest boys - he's Barracuda, he's the psycho, he's everything they want to be but don't have the guts to get there. He's going to show them all.

He would be first, everything would be alright when he came first, all would be put back in place. When he thought of being the best, only then did he feel calm.

A searing and provocative novel by the acclaimed author of the international best seller The Slap, Barracuda is an unflinching look at modern Australia, at our hopes and dreams, our friendships, and our families.

It contains everything a person is: family and friendship and love and work, the identities we inhabit and discard, the means by which we fill the holes at our centre. It's brutal and tender and blazingly brilliant; everything we have come to expect from this fearless vivisector of our lives and world.

Is it possible to enjoy a book if you don't like the main character?
Perhaps that's the reason I couldn't get into the book, at least for first half. As the complexities of the character unfold, it became easier.

Every teenage boy needs to hear this

The emotion, the drive, the mood and the tribulations of Danny needs to be experienced by every teenage boy. This is a perfect coming of age story.

Drama packed into the thinking process of a young man from a migrant family .

This book is fast and descriptive and lefts little unsaid about the thinking emotions and nightmares of a young Australian from a migrant family as he process his inability to reach his dreams of being an Olympic winner for his country.
His feelings of being " a migrant gay kid " on a scholarship with boys from a more affluent society at a private school scar him and leave him with deep feelings of failure . Failure mixed with hatred and embarrassment about his father,and a love affair with an educated " toff " a Scotsman in his late teens. A rare insight into these three sides of life.

Confronting at times, but it grew on me

I loved the narrator in this book! He was excellent at representing the characters and their accents. The story was certainly tough going at times, language and themes fairly confronting. But I persisted with it and found the story to be wonderfully written with a message that all Australians can relate to. I really enjoyed the book in the end , despite almost giving up on it one early chapters.

What made the experience of listening to Barracuda the most enjoyable?

I could not wait to wake in the morning so I could listen to this book. It grabbed me from the beginning and never let go. I listened before work, after work and before bed and all weekend while gardening. The narrator was brilliant. He captured the accents, the emotion and was perfect for this book.

The book starts with Danny as a young boy and then jumps to him as an adult. I loved how it all tied in and nothing was missed. The depth of ALL the characters was just magnificent. I got to know them all. It made me think about Australia and class systems and how other countries view us.It is about families and relationships and dreams and a boy who made peace with it all.

The scene where Danny met with his cousin Dennis and tried to connect with him. It was humble and caring and showed the strengths that Danny had always had.

I listened to the author interviewed on Richard Fidler's "Conversations" That interview sold me this book.

IT WILL KNOCK YOUR SOCKS OFF

The themes are universal, the feel,suburban Melbourne.
Barracuda is about finding a place in the world and a meaning for one's life. The reader experiences Danny's torment and his battle with the world as he struggles to become someone of worth.
Not for the faint-hearted, it is often harsh and confronting. It is also tender and compassionate. It's a very moving book and the pain and sadness of it all linger long in ones heart.

The selfishness of young Dan was almost claustrophobic. I assumed something was going to happen beyond his excrutiating hyper focus on being the best swimmer in the world and his mother's subservience to him (or was it just pure love -- imponderable) and the theme of social exclusion based on class and behaviours. But this young man really didn’t interest me at all.

But I decided to continue because this book has attracted widespread attention in Australia.

Dishearteningly, this was also being read in the context of two key events outside the book. Our newly elected national leader was speaking and behaving in a way that made me ask if his was the voice of an older Dan, modified by time but the core aspirations still there – sport: to be the strongest and the best; leadership: the strongest and the best. Whatever it takes. And not particularly adept when the prize was his.

Secondly, a local television station aired a distressing discussion which included victims, their loved ones and rescuers, about the marked increase in attacks on people, young people, that do not lead to a good old fashioned dust up, but are glassings, and king hits, coming from nowhere. Echoes of Dan. This level is new in Australia.

One has to keep listening to see if this selfishness will be resolved. It is true, there is a constant and almost contradictory underpinning of generosity and patience in Can's care for ill people and this suggests a path that will transcend earlier behaviours. But for me there is a sense of ‘wishful thinking’. This difficult person sweeps past others, not with the power of hope and the holy grail of excellence, but with an urgent self absorbed belief that validates all that he does. The oft repeated mantra of his goal of strength and being the best has unsettlingly echoes, again, in many models of political leadership. Self indoctrination. Indoctrinate the others around us.

So much does the author want to donate Dan a socially acceptable future that there is even a hint that his crime has some justification as a social critique.

I agree that the role of the family as a more selfless decency is a heartening theme and the Tsiolkas effectively bestows on these poor people a positive role amid random acts of violence and personal disorientation.

So, there you go. I have read a book that has offered an interpretation, or explanation, of selfish and singleminded youth (is this a comment on the modern generation?), the school based training of a closed selfish and singleminded upper class, the comforting power of the family, and the acceptance of the fulfilment of homosexuality. OK. Done. But I found the language without music (intentional?) but I thought it was read very well -- with compassion, appropriately paced.

But despite any increase in understanding the human condition I may have gained from it, I really didn’t like the book but thought it had been worth completing.

I love this book. Listened twice!

Where does Barracuda rank among all the audiobooks you’ve listened to so far?

It is my go to book. I love the story about Danny and what an amazing story he tells.

What was one of the most memorable moments of Barracuda?

When Danny travels with his Mother to see his grandma and meets his cousin. A lot happens in this book but this part really got to me

What does Grant Cartwright bring to the story that you wouldn’t experience if you had only read the book?

A great story with a great narrator. I have listened twice now

Barracuda: plenty to bite on

The characters are really well drawn and involving - much more than in The Slap, also by Tsiolkas, which I struggled with.

The jumps in time of narrative, backwards and forwards, works really well. It really showcases and discusses Australia as a country as well as focusing on this one family. I loved it.

Half of It Is More Than Enough

The first part of the novel (Breathing In) is a masterpiece, a firework of floating sentences and breath-taking expressive power. The second part (Breathing Out) is slowly unfolding into a cheesy chicklet. OK, it's extremely hard to write about a new beginning without being a bit sentimental, but Mr. Tsiolkas just can not stop writing those pointless paragraphs over and over until the total spoiling of it all. Even so the first part deserves a high five.

The narrator is awesome, passionate, agressive if necessary and he knows all the songs. Looking forward to hearing him again.