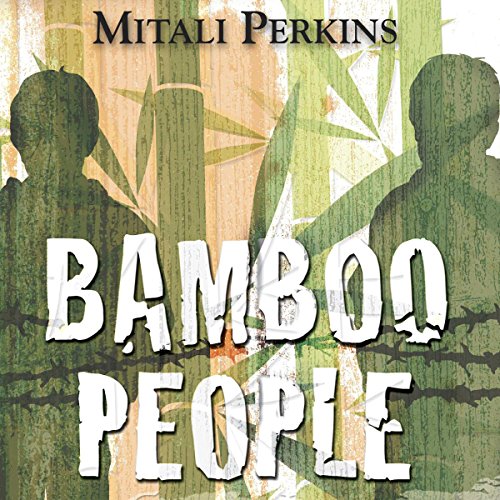 "Bang! A side door bursts open. Soldiers pour into the room. They're shouting and waving rifles. I shield my head with my arms. It was a lie! I think, my mind racing. Girls and boys alike are screaming. The soldiers prod and herd some of us together and push the rest apart as if we're cows or goats. Their leader, though, is a middle-aged man. He's moving slowly, intently, not dashing around like the others. 'Take the boys only, Win Min,' I overhear him telling a tall, gangly soldier. 'Make them obey.'"

Chiko isn't a fighter by nature. He's a book-loving Burmese boy whose father, a doctor, is in prison for resisting the government. Tu Reh, on the other hand, wants to fight for freedom after watching Burmese soldiers destroy his Karenni family's home and bamboo fields. Timidity becomes courage and anger becomes compassion as each boy is changed by unlikely friendships formed under extreme circumstances.

This coming-of-age novel takes place against the political and military backdrop of modern-day Burma. Narrated by two teenagers on opposing sides of the conflict between the Burmese government and the Karenni, one of the many ethnic minorities in Burma, Bamboo People explores the nature of violence, power, and prejudice.

"Narrator Jonathan Davis rises to the challenge of depicting both sides of an ethnic war with distinct voices and steadfast pacing. Eschewing accents, he clearly portrays characters of both genders and diverse ages and nationalities. Davis’s serious, calm delivery of a few tense scenes makes for a gripping listen, but overall the story is surprisingly understated for a war narrative." ( AudioFile)

What listeners say about Bamboo People

An amazing book and well narrated. It kept me on the edge of my seat. Brilliant.

My first of many. I'm just kidding but I preferred the audiobook to reading the actual book and it was much quicker. Thank you

This book is amazing. I love it so much. Lots of adventure, action, and so much more. I strongly recommend!!

Well-crafted book that moves me !!!

This is an extremely well written book with beautiful descriptions of varied settings in crazy unpredictable Burma. The complex relationships of war and refugee peoples are handled amazingly well in this "young adult" book. I am 65 years old with lots of serious reading in my background and this book though a YA book will stick with me for awhile.

One of the best book ever.
It will leave you at the edge of your seat.

This excellent story, told from two points of view, encourages empathy for its young adult audience. I recommend it to teen boys, especially, as it deals with pressures young men face. I think it pairs nicely with Elephant Run.