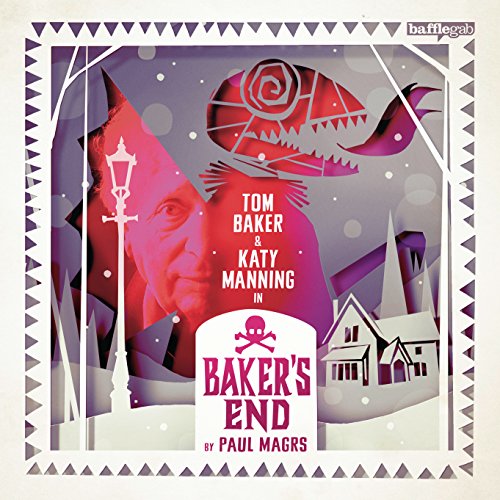 Baker's End: The King of Cats

Former Doctor Who star Tom Baker stars as himself, Tom Baker, in a series of bedazzling audio adventures from the pen of Paul Magrs (Doctor Who, The Brenda and Effie Mysteries): Baker's End.

Peevish actors are descending mournfully upon the remote English village of Happenstance for the funeral of TV legend Tom Baker. His one-time costar Suzy Goshawk is sucked into a parochial vortex of intrigue involving the quailsome local vicar, Tom's acidulous housekeeper Mrs Frimbly and various other fruminous scumblebums. None of them can agree upon how Tom met his disastrous end, and Suzy is starting to suspect that something murksome and swervish is going on.

The snow comes down, and Suzy finds herself trapped at Baker's End for Christmas, with all the village's creepy pensioners enslaved by a strange, dancing dragon...and a Sinister Presence lurking on the sidelines.

Why are old ladies twerking their bottoms outside the post office-cum-mini-mart? Why is the vicar creeping about in the bushes in the dead of night? And why, just when all looks hopeless, does a strange, scobberlotching creature spring into view? Who exactly is the King of Cats in his furry costume and his battered golden crown?

"A bizarre, off-kilter story suffused with the feeling that almost anything might happen.... Baker is in full flow here, playing an amped-up version of himself, much in the same way that Matt Le Blanc does on Episodes.... this shaggy cat story is probably the oddest thing you will hear all year. It may well be the funniest too!" ( Cultbox)
"Beautifully bizarre and laugh-out-loud funny, writer Paul Magrs wonderfully baroque dialogue suggests the star himself may have had some input.... A riotous, fantastical, absurdist romp then.... 82-year-old Tom has never sounded more at home than in Baker's End." ( Edinburgh Evening News)
"Giggle-inducingly joyous listening.... Top wordsmithery on the part of the lovely Mister Magrs, beautifully realised by the cast and crew.... Highly recommended listening, if you like the clever, the silly, and the downright delightfully batty." ( We Are Cult)

What listeners say about Baker's End: The King of Cats

Don't listen to this in the car!

It's really hard to drive when you're crying from laughter. WTF did I listen too?

I love Tom Baker, and these stories are an absolute delight! Thank you for the blazing wit and humor, getting me off to a wonderful start before work! I can tell these will be favorites for years to come. All hail the King of Cats!

A wacky adventure for Tom Baker and Susie Goshawk in Bakers End. Quite fun for fans of Tom's work.

If Tom Baker and Katy Manning did Monty Python

Bafflegab have produced some of the very best audio dramas (The Scarifyers) and once again they have teamed up with writer Paul Magrs (The Brenda and Effie Mysteries) for Baker’s End.

The story starts when Suzy Goshawk (narrator + played by Katy Manning) travels to Happenstance for Tom Baker’s funeral (played by himself), but not all as it seems.

Some stories are predictable, this is not. It’s bonkers and a highly enjoyable listen.

Only three episodes have been produced so far, but I do hope the saga of Baker’s End continues……..

Paul Magrs, Tom Baker & Katie Manning at their crazy best! Can’t wait to get the next 3!

And very very funny! I'm hooked, the cast are all marvellous, of course the king of cats is always centre stage. Where else?

What can you say about The King of Cats?

It has Tom Baker playing a version of himself so over the top he's practically half way down the other side. It has the lovely Katy Manning playing the straight woman to Tom's lunacy. It has a talented supporting cast playing the eccentric villagers of Happenstance, where murksome deeds are beginning to unfold.

Mostly it has a mad plot that veered from the bizarre (the various versions of just how Tom died) to the downright ludicrous (the acolytes of Clacky the Dragon and where they keep their weapons, not to mention just what incantation our heroes use to save the day) by it's end.

I absolutely loved it. :)

If you are after something incredibly silly, that will have you in stitches then The King Of Cats is perfect!!
I can honestly say that I have not laughed like that since my mid teens (& I'm nearly 40 now) yep funny things have coaxed a smile out of me, but real belly aching laughter, not a bit of it!
This though, was hilarious!
What a shame that there are only 3 of them...
Well worth the money!
Will definitely be buying the other two (just wish there were more)!..

Baker At His Best

Excellent performances all round but Tom is allowed free reign to be himself in a crazy adventure in which he always seems at home. Some very humorous rude-ish sounding phrases like 'fudge-knocking' I laugh at every time!

For enthusiasts (and relatives) only

Would you ever listen to anything by Paul Magrs again?

Would you listen to another book narrated by the narrators?

Gushing reviews made me try this but it's seriously disappointing, maybe one for enthusiasts and relatives of the cast!

Dr Who for almost grown ups

I slightly miss the Dr Who of my childhood : the scarf, screams and interesting aliens. Life needs a bit of silliness sometimes. This is fantastic.
Thank you. Please do more.