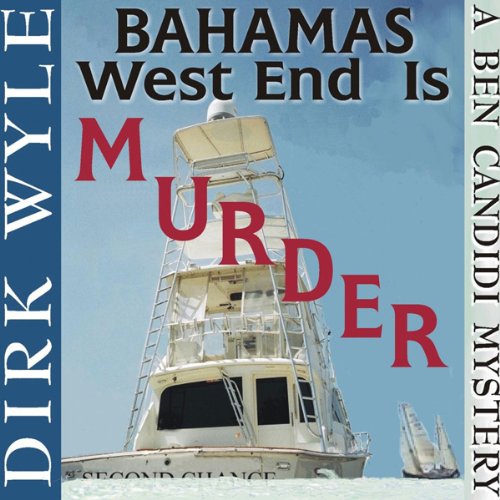 As vacationing Ben Candidi and Rebecca Levis sail through International Waters toward Grand Bahama Island, they receive a strange welcome - a sinking cabin cruiser with a dead man at the helm. Ben knows how to patch bullet holes below the waterline and Rebecca knows how to estimate time of death. And they agree that the West End marina is the right place to bring the body. To avoid trouble, they play it dumb and treat the cocaine-smuggling marina tenants as the divers and sport fishermen they are pretending to be.

Unfortunately, the mailbox corporation in Miami that owns the yacht ignores Ben’s $100,000 salvage claim - and the Bahamian police won’t let him move the yacht to Florida. The harder Ben and Rebecca press their claim, the more sinister West End becomes. Should they cut their losses and run? Or is it too late already?

What listeners say about Bahamas West End Is Murder

Yes, I would recommend this audio book to a friend. It engages the intellect as themain characters, Ben Candidi and his fiancee, apply their knowledge of science and medicine, respectively, to unravel the mystery of the murder. It is also consistently maintains a high level of suspense, from chapter to chapter, so the reader is unwilling to interrupt listening until the end. It also reveals am current trend common to all governments, the rising corruption and baseness of those who get a taste of power.

Yes, the plot, kept me in suspense, as, Ben Candidi and his fiancee, gradually gathered clues about the potential murderers and progressively increased the risk of being injured or killed by the members of the illegal drug trading club; especially so after the bungled poisoning attempt as Ben Candidi kept delaying his stay to get bureaucratic approval for leaving the Bahamas with the salvaged yacht.

The final scene when the Andrew and Bahamian police officer caught up with Ben and his fiancee in their sailing boat and revealed the truth of the investigation he had secrretly carried out.

Yes, the moment when the Bahamian officer reveals the truth of what happened in the scene described above.

The story was very well written. Though the performance was very good, the voice representing the main character seemed somewhat immature, more like that of a teenager, than of a man in his early thirties.

If you could sum up Bahamas West End Is Murder in three words, what would they be?

Which character – as performed by Michael Yurchak – was your favorite?

Where does Bahamas West End Is Murder rank among all the audiobooks you’ve listened to so far?

I've long been a fan of Ben Candini, and the audio book did not disappoint me.

Taped out in chapter 6

This book was not for me. Main character is not likable comes off as a real know it all. Way too much detail about nothing to do with the story. To be fair I did not make it past chapter 6 it might get better further into the book.

Would you try another book from Dirk Wyle and/or Michael Yurchak?

Not sure. Maybe. Just because I wasn't greatly impressed with this one, doesn't mean another wouldn't be better

Would you be willing to try another book from Dirk Wyle? Why or why not?

It was kind of monotonous. Needed more inflection from the reader.