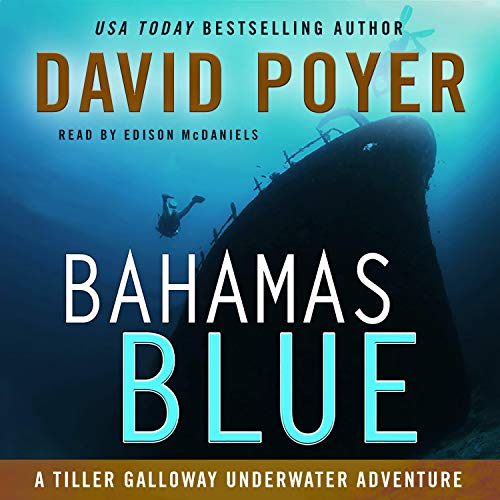 Salvage diver Tiller Galloway vowed he would never work for "The Baptist" again. Until the menacing kingpin makes him an offer he can't refuse, sending him deep into the beautiful blue Caribbean to raise 50 tons of cargo - a dive to the razor's edge of death. Caught in the cross fire of a crazed underboss and hostile islanders, Tiller takes on a nightmare of double crosses, as a scenario more sinister than he ever imagined begins to unfold. From the author of Down to a Sunless Sea comes this shattering sequel to Hatteras Blue, a tale as explosive as those of Clive Cussler and Peter Benchley, and packed with some of the most breathless undersea scenes ever written.

"Poyer has an accurate ear for dialogue and he fleshes out his characters...plenty of built-in tension." (New York Times book review)

"...Poyer establishes himself firmly in the company of our best writers of seafaring adventure." (Robert Houston, author of Blood Tango and The Fourth Codex)

What listeners say about Bahamas Blue

i received a free copy of this audio book at my ownrequest and voluntarily left this unbiased review.
This is one of the most entertaining books I've read in the last couple of years.
Written with amazing descriptions. a great storyline and amazing characters that will keep you intrigued to the final chapter.
Really enjoyed the narrator's style.
Highly recommended

The main guy has done time and now is pretty much forced to work for the drug lord again. Not my favorite thing. But the action is all good and the story does measure up.
The narration by Edison McDaniels made the story better.
I won the audio in a giveaway!