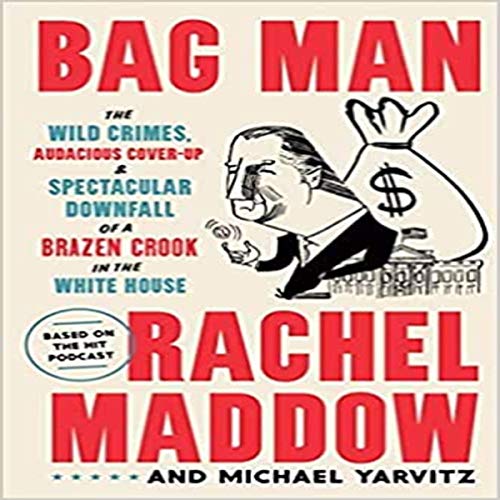 “Rachel Maddow and Michael Yarvitz expand on their riveting podcast to create a work both scholarly and disturbing in its parallels to current events.” (Preet Bharara, New York Times best-selling author of Doing Justice and host of the podcast Stay Tuned with Preet)

Is it possible for a sitting vice president to direct a vast criminal enterprise within the halls of the White House? To have one of the most brazen corruption scandals in American history play out while nobody’s paying attention? And for that scandal to be all but forgotten decades later?

The year was 1973, and Spiro T. Agnew, the former governor of Maryland, was Richard Nixon’s second-in-command. Long on firebrand rhetoric and short on political experience, Agnew had carried out a bribery and extortion ring in office for years, when - at the height of Watergate - three young federal prosecutors discovered his crimes and launched a mission to take him down before it was too late, before Nixon’s impending downfall elevated Agnew to the presidency. The self-described “counterpuncher” vice president did everything he could to bury their investigation: dismissing it as a “witch hunt”, riling up his partisan base, making the press the enemy, and, with a crumbling circle of loyalists, scheming to obstruct justice in order to survive.

In this blockbuster account, Rachel Maddow and Michael Yarvitz detail the investigation that exposed Agnew’s crimes, the attempts at a cover-up - which involved future president George H. W. Bush - and the backroom bargain that forced Agnew’s resignation but also spared him years in federal prison. Based on the award-winning hit podcast, Bag Man expands and deepens the story of Spiro Agnew’s scandal and its lasting influence on our politics, our media, and our understanding of what it takes to confront a criminal in the White House.

What listeners say about Bag Man

Not narrated by Rachel

Such terrible narration, I couldn’t listen. Why did Rachel not record it herself? So so bad. Don’t buy it.

OMG, the narration is terrible, from the first sentence when he mis-pronounces the author’s name!

Rachel, please re-record it yourself!

Narration is halting and uninflected. The book is great and Maddow;s Bagman podcasts are excellent. This audio presentation is not worth your time.

Rachel should have read it

great story that would have been better served if Rachel had performed it. I recently listened to Blowout and her narration made the story come alive. this narrator seemed to be yelling throughout with no variance. he also doesn't know how to pronounce Maddow. otherwise a great tale. brought back lots of memories while including much that was new.

James McSorley gets off to a rocky start by mispronouncing the author's name, and it's hard to overstate the awkwardness of hearing an older gentleman reading Rachel Maddow's sarcastic Gen-X asides and snarky comments.
But he modulates his tone of voice in a natural way, and he keeps the text moving forward in a way, that you can't take for granted with journalistic/historical audiobooks.

Bottom line: His cheerful voice will let you imagine you're hearing the book over the PA at a state fair. If you don't like that idea, that's on you.

Disappointed in the reader

Being accustomed to Rachel’s reading in other audio works (Blowout) - the reading of this one left a lot to be desired. The presentation of the facts, however, was flawless as expected.

Enjoyed the podcast but the narration is just awful!

You really should find out how to pronounce the author’s name before diving in.
I really enjoyed the podcast and I’m sure this book is great as well. I just can’t listen to the narrator. Just plain awful.
Rachel should request her money back for the service.

Excellent documentation of under covered scandal.

The original podcast was excellent and this book gives more details to a scandal that was overshadowed in its time and in history by the larger Watergate scandal. Too bad Rachel Maddow didn't do the reading herself because unlike James McSorley she knows how to pronounce her name, and the informal "wells" and "ums" come off a bit awkward in what is for the most part a decent reading. Well worth it despite the somewhat lacking performance.