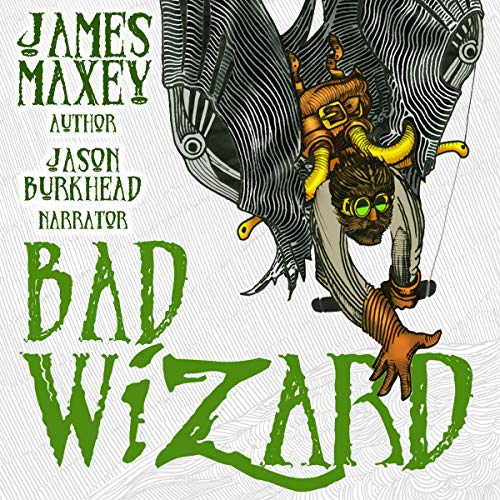 In 1892, Oscar Zoroaster Diggs turned up in Topeka with a suitcase full of high quality emeralds. Instantly the richest man in Kansas, his winning smile and keen mind launched him into a meteoric political career. As Secretary of War under Teddy Roosevelt, Diggs oversees the construction of a fleet of rigid airships. Dorothy Gale, a reporter for the Kansas Ear, is the one person who knows the truth about Diggs. She met him 10 years prior in the Emerald City, where he ruled as the Wizard. But how can she explain to her editor that Diggs intends to use his aerial navy to invade an island in the clouds ruled by witches? Stopping Diggs is going to take more than the power of the press. She’ll need the help of old friends, and maybe a Winged Monkey, as she pursues the Wizard across the wondrous and deadly Land of Oz.

What listeners say about Bad Wizard

One of the best stories i've heard in a long time

The story was simply wonderful. Every twist and turn and the character development, awesome! The magic, science fiction, various details and explanations were all amazing. Dorothy's time while being back at our world as well as her eventual return to Oz was such a great journey. This story kept you wanting to find out what happens next and never left me bored.

The story is just not holding my interest at all, but the worst part is the narrator. He comes to a full stop halfway through nearly every sentence. It's too distracting. I made it to chapter 18 and I don't think I care what's going to happen enough to get through any more of it.
I also thought, from the description and subject, that the story might contain a bit of wit or whimsy. It doesn't. That doesn't make it a bad book but if that's what you are looking for, you will probably be disappointed.

This book takes place ten plus years after Dorothy has returned from Oz: Teddy Roosevelt is now president [putting this in the early 1900's]; Auntie Em and Uncle Henry have long since died; Dorothy is all grown-up and a newspaper reporter; and the "Great and Powerful Wizard of Oz" Oscar Diggs is the Secretary of War for President Roosevelt. There are many characters from the the Baum books who also make an appearance. A new character is Esau - "The Flying Monkey" - who is a hairy man who jumps from hot air balloons as an act but is actually quite an adept engineer and a very religious man. There are several discussions between the characters related to religion, magic and evil. I was very intrigued by this aspect of the story. The discussion related to what Oz actually may be or represents was most interesting - I liked that the author did not provide a definitive answer, leaving the reader [and the characters] to ponder the symbolism of it all. Overall, I really enjoyed revisiting Oz.

The narrator, Jason Burkhead, does various voices for all of the different characters. Overall, his narration is fine but he has an odd quirk while narrating - he pauses at odd times in a the middle of a sentence. It is not consistent, more haphazard, but he does it enough that I found it to be a bit distracting.

What a surprise! At first I was not sure thought it was going to be a little silly. I was wrong. It was great. And Mr Maxey put a new twist on life after Oz.
I won't spoil it for you, so listen and remember watching the original on TV when it first debuted. Then throw in a little from the last movie that came out and find out what happened next.
This audio was given to me free and I voluntarily gave this review.

Disclaimer: I received a free copy of this book in exchange for an honest review.


I was a beta reader back in 2015 when this book was first written. At the time I was familiar with the Wizard of Oz movie but had only passing knowledge of the original book. The book draws it's lore mostly from the first two books but extrapolates from there with Maxey's imagination. I only note this to say that if you have not read the books - you get plenty of explanations and I did not have any trouble following along with the story. Having read the books, now I can appreciate even more the source material that Maxey drew from.


Ten years after Dorothy returned from Oz and her life has changed. She is no longer a little girl. She uncovers a plot by the Wizard to not only return to Oz, but to conquer it and take back the throne he once held.


We have elements of steampunk mixing with magic systems that Maxey has cleverly defined to raise real stakes. We see many familiar faces with new twists in their Happily Ever After and revelations about their origins that were previously unexplored. There is action, imagination, and some thought provoking questions. How do you choose between two evils? What is the role of religion and faith when confronted with real magic? What is home? Because it's a Maxey novel, he keeps the pace brisk while fleshing out his many characters. Answers aren't easy or readily apparent.


If you've wanted a bit more of a grown up version of the Wizard of Oz or have ever wanted to see a zeppelin take on a pack of flying monkeys escape to with the Bad Wizard. You won't be disappointed.


This is the first book I've listened to that was narrated by Jason Burkhead. He did a wonderful job with clear narration, bringing characters to life with unique voices. He was very easy to listen to and I would gladly listen to other titles of his in the future.

I want to put it here first that the Wizzard of Oz is one of my least favourite stories - it's not the books fault but the film, Having to watch it every year put me off it but when I saw this book I had to try and overcome my dislike to give it a fair listen.

I think I did as I enjoyed it, it really is a good explanation of what happened after Dorothy left OZ and grew up yet ends up back there with nearly all the original characters. If you love the story you will love this one also I think and even if like me you just had been put off due to overexposure to the film I would give it a listen as I think you will find its worth it.

It is well written with the author coming all and any questions you might have been left with after the original story finished.

The narrator only adds to the book, his voice and voice acting skills make the story totally enjoyable to listen to.

I had always assumed I would never revisit the Oz Universe but James Maxey's book made me glad I did.