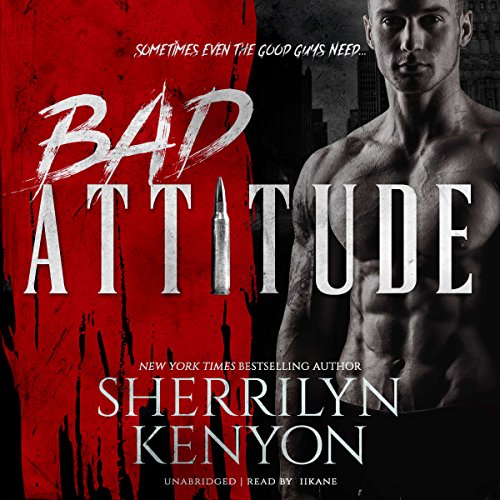 B.A.D. agent Sydney Westbrook must find the perfect sniper for a risky counterterrorism mission. The assignment is simple: find and kill a hired assassin before he kills a high-profile world leader during a peace conference on American soil.

J. D. Steele, a trained military sniper whose attitude problem landed him in prison, seems like a good candidate for the job since he doesn't have many other options. But it turns out Steele doesn't take orders easily - not even when they come from an intriguing agent who has his number down pat.

As they're dragged deep in to a secret world of freelance killers, Sydney begins to discover the man of honor hidden beneath Steele's arrogant facade. It's a man even Steele didn't know he could be. But how can he fulfill his mission when doing so will risk the life of the only woman he's ever really cared for?

What listeners say about Bad Attitude

The narrator mispronounced so many words, and placed emphasis on weird words in the sentences. It made it difficult to listen to.

I am sure this is a very good book, Sherrilyn Kenyon is one of my favorite authors but I just couldn’t get through it. The narrator was just all together the wrong choice for these characters. It’s not that she isn’t a good narrator, it’s just that she isn’t the right fit for these characters in my opinion.
Very sad as Sherrilyn doesn’t come out with new books in audible very often.

The narrator adds. Pauses at random, every. Few words. It drove me crazy. Some of the dialogue was also over-acted to the point of caricature. I don’t think a different narrator would bring my rating up by much, however, because the writing was clumsy and worse: the story was dull (or perhaps droll... more on that later)

I love alpha male action-romances where the gals are as kick-ass as the guys. I also enjoy campy, punny, Guns N Amore style romance. This book failed as either type of story. The ex-con, military thriller concept wasn’t very credible, the action was sparse, and there were way too many talking and filler scenes where nothing happens. The chemistry fell flat for me and I didn’t buy how quickly our H/h got busy (hand job/oral within a day of H & h meeting). On the other end, you’d think a book about a secret government agency named B.A.D. would be funnier. The author tries really hard to be clever, but it comes off as telling more than showing... like where she writes in a Monty Python reference... and then tells us that it’s a Monty Python reference.

Additional, random annoyances include constantly referring to “that Vietnamese woman” for the first several chapters or the author’s love of the word “droll” (droll face, droll stare, droll voice ...argh! do a word search and use a thesaurus!)

Even free with Audible Plus, I did not enjoy this and won’t move on to later books which, although using different narrators, will cost a credit. For better military style action-romance, I suggest the first few books in the Titan series by author C Harber (used to be free with Audible Escapes and you can get books 1-5 for a single credit in a collection- those first books are the best ones). If you’re looking for campy action-romance with kooky acronyms, better pop culture references, and funnier dialogue, go with Ready to Were by R Peterman, an urban fantasy about spy werewolves working for W.T.F. (also used to be free with Audible Escape... and I would consider only books 1&2 if on sale... the rest jump the shark a bit and don’t have fabulous narrator Hollie Jackson).

The story was enjoyable but...

The story was good,
. Enough so that I listened even though the reader was not. She mispronounced words, used the wrong words (unless the author did and it wasn’t picked up when the book was edited), paused at strange places, and some f the male voices were almost comical!

I like the characters & the plot, but the narrator's phrasing was very odd. Sometimes you had to rewind & relisten to figure out what the author actually said.
I'll listen to the next book only if there is a different reader.

Such a fantastic story... destroyed with Jami Fox sound alikes for 90% of the characters & poorly placed pauses. Major props for the "other room" voices, though. Wish the rest of the reading was that good...

Narrator has a good voice but bad performance...

I made it five minutes before I had to quit. The narrator’s voice is good but the performance was really really awful. 4/5 for the story since I didn’t actually listen to it, but from the part I heard sounds decently written.

the story was boaring and difficult to follow. the narrator were not very good either. the voices either sounded the same or cartoon-ish. I waited a credit on this one.

Story seems okay, but I'm not sure since WORDS ARE MISSING IN NEARLY EVERY SENTENCE! I have tried listening to it on two devices and with 4 different speakers. Dismal failure.

The narrator pauses at random points and reads too slowly for Steeles parts, made it really boring to listen to. I had to set it at 1.2 speed but that didn't help completely because the story is slow and there is literally zero chemistry between the main characters but they hook up immediately. Glad this was free and I didn't waste a credit.

not for me ...i actually couldn't stand "the old guy " how lived under the ground. i couldn't even understand half the thing he said. and the main charachter should have bene a strong woman? She was at best insicure and used ti Bully around. for me Is no!

I found the storylines wanting, the characters were immature. this must have been an earlier book.