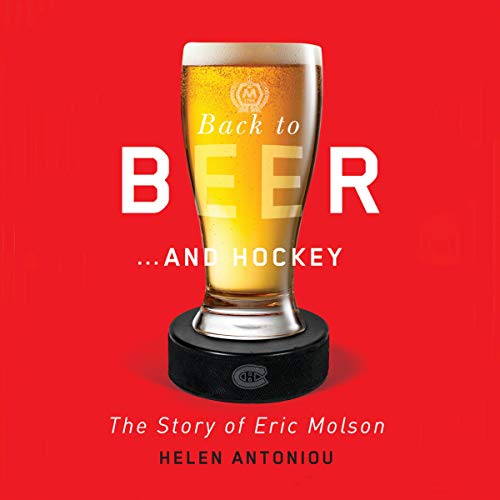 To most Canadians, the Molson name is part of the very fabric of Canada. Since 1786, when John Molson founded his first brewery in Montreal, it has become synonymous with beer, hockey, and philanthropy. Few realize, however, how close the family came in recent years to losing control of the enterprise.

Back to Beer...and Hockey offers intimate details of the life and work of Eric Molson, who not only saved the company, but positioned it to thrive as a global brewery into the 21st century. With unprecedented access to the Molson family, Helen Antoniou traces Eric Molson's evolution from a young brewmaster captivated by the chemistry of beer-making to chairman of Molson.

Quiet by nature, he had to confront big egos, navigate complex boardroom politics, and even battle a disruptive cousin who tried to push him out of the way. Antoniou's carefully researched account details how the introverted Eric overcame his aversion to conflict to take the company from a failing conglomerate back to its core business of beer, eventually turning it into one of the world's leading brewers.

Today, he has passed the torch to his sons, the seventh generation, but his steadfast vision prevails. An absorbing account of one man's struggle at the helm of an international brewing giant, Back to Beer...and Hockey shows how Eric Molson's guiding principles influenced the future of Molson - both the enterprise and the family.

What listeners say about Back to Beer...and Hockey