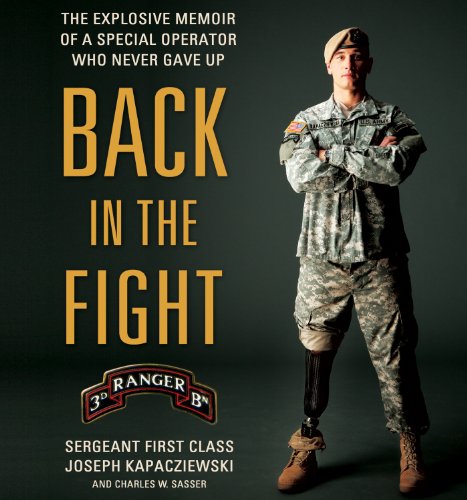 Back in the Fight

On October 3, 2005, Kapacziewski and his soldiers were coming to the end of their tour in Northern Iraq when their convoy was attacked by enemy fighters. A grenade fell through the gunner’s hatch and exploded, shattering Kapacziewski’s right leg below the knee, damaging his right hip, and severing a nerve and artery in his right arm.

He endured more than forty surgeries, but his right leg still wasn’t healing as he had hoped, so in March 2007, Kapacziewski chose to have it amputated with one goal in mind: to return to the line and serve alongside his fellow Rangers. One year after his surgery, Kapacziewski accomplished his goal: he was put back on the line, as a squad leader of his Army Ranger Regiment.

On April 19, 2010, during his ninth combat deployment (and fifth after losing his leg), Kapacziewski’s patrol ran into an ambush outside a village in eastern Afghanistan. After a fellow Ranger fell to withering enemy fire, shot through the belly, Sergeant Kap and another soldier dragged him seventy-five yards to safety and administered first aid that saved his life while heavy machineguns tried to kill them. His actions earned him an Army Commendation Medal with “V” for Valor. He had previously been awarded a Bronze Star for Valor—and a total of three Purple Hearts for combat wounds.

Includes a bonus interview with Sergeant Joseph Kapacziewski and his editor, Marc Resnick.

"Military buffs will relish this fast-paced account of youthful yearnings for military service, brutal Ranger training, and page after page of camaraderie, horseplay, grim humor, and vivid nuts-and-bolts action. Even readers lukewarm to military memoirs will admire the fierce dedication required to be the first Ranger to go to war with a prosthetic limb." ( Publisher's Weekly Review)

What listeners say about Back in the Fight

A very touching and inspirational book. A true warrior with a do not give up attitude.

Absolutely loved the story, extremely motivating and makes me feel good to know we have warriors like Kap putting it on the line for us. However, I could not stand the female narrator's voice. She sounded like a cheap, annoying, forced southern debutante. I literally had to skip everyone of her chapters which is too bad because I'm sure some good information is shared...... I'm just go by the book and read Kim's chapters.

This book was awesome! My son was there with Kap in 2009 and to hear what they went through was as a mother very scary and I'm so proud of these men. They are true hero's.

Awesome story of heroism and grit.

Great story Kap! In hindsight, maybe opening that hatch was meant to happen so you can continue to lead the way.

I've read almost all war books. This is one of the best. Very good writing/ narration.

Great book. This is a must read.

This book was amazing. I couldn't put it down. This is a must read. awesome.

The Ranger as a True Warrior

Joe Kapacziewski, referred to as Kap, left high school and joined the army to become a Ranger. He would settle for no less. There were no ideas of quitting before the training began. The training continued to become more difficult as time marched on. However, Kap never once whined. He served his first tour in Afghanistan and upon coming home had a final course to complete before becoming a full fledged Ranger.

Kap was serving his third tour of duty in Northern Iraq. His tour was almost over when, on October 3, 2005, their convoy was attacked by the enemy. A grenade fell through the gunner's hatch and exploded. Kap's right leg below the knee was shattered, his right hip was damaged and his right arm had a damaged nerve and artery.

Kap refused to have his right leg, below the knee, surgically removed. He did finally agree to the amputation in March, 2007. Kap had undergone 40 surgeries prior to accepting the reality that his leg would not heal. He wanted to return to Iraq and fight alongside his men as a squad leader of his Army Ranger Regiment

One year after the surgery, he met all of the requirements needed to return to Iraq as a leader of men. Kap is the only Army Ranger returning to direct combat operations with a prosthetic limb.

Kap has received many accommodations for his many tours of duty in Iraq. On April 19, 2010, during his ninth deployment and the fifth after losing his leg, he earned an Army Accommodation Medal with V for Valor.

This memoir was an excellent listen. I listened for two days and was glad to have purchased this memoir. I don't know if Kap still deploys to Iraq or elsewhere at this time. The narrator did a very good job. The character development was well done. There are improvements being made on prosthetic limbs every day. Kap had several made for various activities. While on deployment Kap always brought an extra one. During his first deployment with an artificial leg he slid down a hill after catching his boot on a rock. Kap was sure glad that he had another one to use. Kap's aim in life so far has been to fight for his country, America.

Great story about another American Hero

What did you love best about Back in the Fight?

The timeline of a rise, fall and recovery of a soldier.

What other book might you compare Back in the Fight to and why?

Have you listened to any of Johnny Heller and Jo Anna Perrin ’s other performances before? How does this one compare?

Once he decided that he needed a new plan, his determination to return to the Rangers grew and drove him to accomplish his new "mission".

Would you listen to Back in the Fight again? Why?

Probably not, since the story is unique first time you lkisten to it.

What was one of the most memorable moments of Back in the Fight?

I would say the recovery phase, which could have been described more in detail, and should have had more room in the book.

What does Johnny Heller and Jo Anna Perrin bring to the story that you wouldn’t experience if you just read the book?

An experience of hearing the actual people speaking.

Good story, which should have been longer and filled with more stories from his deployments.
The amputation and the recovery afterwards was too short in my opinion, and should have contained more wins and defeats.
But besides that a good and warm book, that I finished in no time.

Amazing story about the courage and determination of a great soldier, but the amount of background to the various wars and conflicts was mind numbing not alot of actual content about the author until the last quarter.