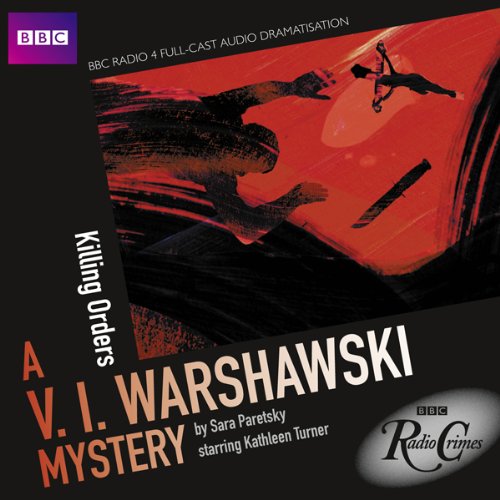 Feisty Chicago private eye Vic ‘V.I.’ Warshawski is used to getting mixed up in complicated cases. But when three million dollars in share certificates are stolen from a Dominican priory, she really doesn’t want to get involved. Because agreeing to investigate would mean doing a favour for Aunt Rosa, the priory’s treasurer, and Vic has never forgiven Rosa for something she did a long time ago. Against her better judgement, Vic gets drawn in, only to be suddenly called off the case. But she doesn’t give up easily and, despite a campaign of intimidation against her, starts to uncover a massive conspiracy involving the Mafia and the Catholic church... .

Starring Kathleen Turner as V.I. Warshawski and with a star cast including Martin Shaw, Adjoa Andoh, and Lorelei King, this gripping drama will appeal to all fans of Sara Paretsky’s hard-boiled heroine.

What made the experience of listening to BBC Radio Crimes: A V.I. Warshawski Mystery: Killing Orders the most enjoyable?

It was like being in the room, the actors are wonderful

What was one of the most memorable moments of BBC Radio Crimes: A V.I. Warshawski Mystery: Killing Orders?


What does the narrators bring to the story that you wouldn’t experience if you just read the book?

Its more real, the mind gets a real visual of the characters and even the cloths they would be wearing, excellent cast of readers, if they are just sitting at a table and reading it sure doesn't come across that way.

V.I. Warshawski gives being a

Love to listen to Sara's books, hope I can find more!!

Wonderfully brought to life by Kathleen Turner. Allowed you feel like you were in the story.

Audio Drama at its best!

This is a gripping and terse thriller excellently brought to life. More audio drama please.