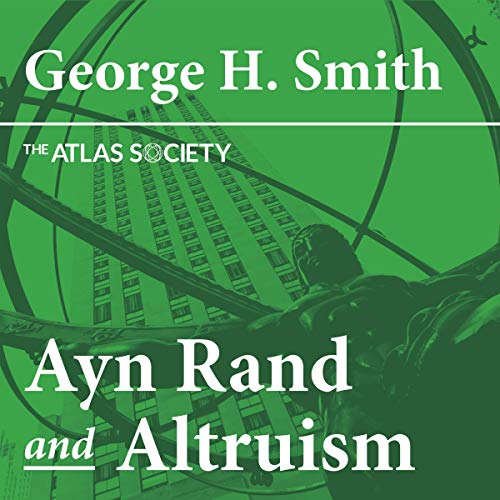 In Ayn Rand and Altruism, George H. Smith calls attention to benevolence in Rand’s thinking. Indeed, Smith defends Rand’s rejection of altruism by contrasting it to benevolence. In this series of essays, originally published on Libertarianism.org and republished by The Atlas Society with permission of the author, Smith begins by establishing that Rand’s definition of altruism - “the placing of others above self, of their interests above one’s own” - is identical to the definition of altruism originated by Auguste Comte. The 19th-century French philosopher considered altruism the basis of morality. Rand considered altruism morality’s antithesis.

Smith explains: "Rand’s analyses of altruism - including her claims about its moral, social, and political implications - are a virtual negative image of Comte’s defense of altruism. Thus, however much critics may dismiss Rand’s attacks on altruism as unjustified, her treatment of altruism, as discussed and defended by the man who originated the term and who defended altruism in more detail than any other philosopher, before or since, was remarkably on point."

Smith emphasizes that Rand objected to altruism on the grounds that it is a duty. Benevolence is voluntary. The distinction has serious political consequences. Altruism becomes the moral basis of collectivism. It can be used malevolently to force individuals to sacrifice themselves. Smith refutes the absurd claim that Ayn Rand, in rejecting altruism, advocated a cruel disregard for the well-being of others, and he asserts that it is categorically incorrect to consider Ayn Rand someone who “defended selfishness in the vulgar sense, according to which an egoist should show no concern for the welfare of others.” Indeed, Smith concludes after a sweeping and methodical examination of Rand’s position, “That was not her point at all.”

What listeners say about Ayn Rand and Altriusm

Ayn Rand, who hurt you?

I don't understand why Ayn Rand is still a thing. She's bass-ackwards in thought. But this was a good listen and descriptive.