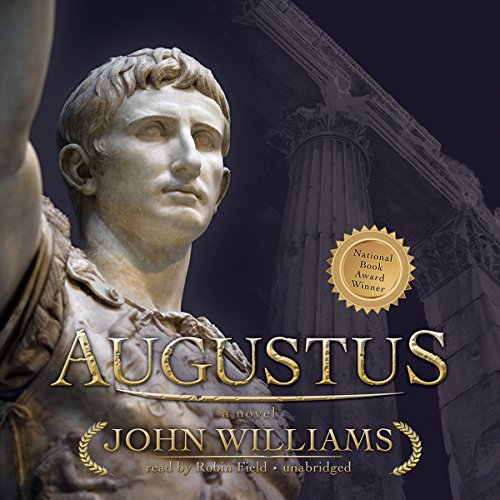 A brilliant and beautifully written novel in the tradition of Robert Graves’ I, Claudius, Augustus is a sweeping narrative that brings vividly to life a compelling cast of historical figures through their letters, dispatches, and memoirs.

A mere 18 years of age when his uncle, Julius Caesar, is murdered, Octavius Caesar prematurely inherits rule of the Roman Republic. Surrounded by men who are jockeying for power—Cicero, Brutus, Cassius, and Mark Antony—young Octavius must work against the powerful Roman political machinations to claim his destiny as first Roman emperor.

Sprung from meticulous research and the pen of a true poet, Augustus tells the story of one man’s dream to liberate a corrupt Rome from the fancy of the capriciously crooked and the wildly wealthy.

What listeners say about Augustus

Great writing, and its organization as a set of letters is brilliant.

He is trying to change his diction for the various narrators.And it sounds terrible, particularly when narrating women.
YOu should get a different narror for this wonderful book.

Send me to Pandataria...to die

If you want to experience Julia's painful exile to Pandataria, then pick up this audiobook. The male narrator does this impersonation of Julia that is absolutely brutal. The best way to describe the performance would be Barbara Bush impersonating an old woman. I think that's the best I can do. I would rather copulate with Julia after she's been infected with venereal disease by most of the Roman aristocracy. That at is at least treatable. Now I'm just stuck with this dude's voice in my head.

And the story is getting pretty high praise on here, and I'm a little surprised. The history is fine. The story of the Julian-Claudian reign is great. But so much of the exchange via letter is subject matter that both the sender and recipient know. I appreciate this is epistolary, but come on. Try harder. For example, a letter might start, "I know you're my son and married to _______." And the reader needs that information, but there are so many more graceful ways to convey the information e.g., "A mother will never experience the joy I did when you married _______." Or something. I just listen to them; I don't write them. But go check out I, Claudius or something else first.

The son of Caesar calls to you.

John Williams read some Robert Graves and said, "Yeah, I got this Roman. I can do this." I'm trying to think of equivalent historical fiction that orbits the same level of prose mastery: Norman Mailer, Robert Graves, Hilary Mantel, E. L. Doctorow and a few others belong on this very short list.

There are some writers (like Pynchon, etc) who seem to find their groove and mine that style/approach for all it is worth. Others like Williams just appear to get bored with one style, form, or approach to literature. They want to master all. John Williams who is also known for his college novel Stoner and his Western Butcher's Crossing decided to give writing an epistolary, historical novel a try. What he created is one of the greatest historical novels of all time. Probably not as good as Robert Graves (or dare I say Hilary Mantel), but damn close.

NOT THE BEST FORMAT FOR THIS HISTORY

Interesting the author chose to construct his history from letters and dispatches etc and it worked for me for about 6 or 7 hours but then the necessarily fragmented and often too subjective viewpoints began to irritate and it all became too chatty and I quit before the end. I didn't feel I was given any particular insight into Augustus' character, but I had expected to gain this perspective from this work. I think this book could be better enjoyed alongside a more objective history of the first emperor.

An interesting introduction to Roman history

What did you love best about Augustus?

The book is presented as a series of letters by people who know or knew Augustus constantly providing different perspectives and thoughts about a larger than life figure sometimes with the perspective of the times of the events sometimes years afterwards. It made for an interesting format. The book seemed packed with realistic details.

What other book might you compare Augustus to and why?

I cannot remember another historical fiction book with the constantly changing narrative device of Augustus.

Have you listened to any of Robin Field’s other performances before? How does this one compare?

No, but the narrator gave an impressive easy to follow performance. I was almost put off this recording by a negative review which I'm glad I ignored.

A very interesting read to introduce me to the character of Augustus Caesar. The book neither dwells long on gossip nor goes deep into battle tactics or economic theories. A good balance for me. I found he pace of the book good until the final soliloquy at the end which dragged a bit. I definitely recommend the book.

Wanted to finish, but the narration....

Would you try another book from John Williams and/or Robin Field?

Robin Field - No! His attempt at voice acting was terrible, with the majority a minor variation of feminine pubescent boy voices. Unbearable. I tried twice to finish because the book itself is interesting but it just left me angry both times. Drop the voice acting.

This reviewer is hard to listen to. He has a dour reading style in this book and the other I've listened to, Stoner. His reading is replete with distracting mannerisms, such as his affected snicker. His characters are so pat that they seem to return from past books to the current ones. Others may like his style, but he makes all the writing seem flat and negative; and he distracts from the story at hand.

loved it !and a memorable last letter of Octavius Cesar what a fantastic human being his words so poetically written and so current for the world we now live in

This is a magnificent historical novel about Augustus.

The author tells his story using imaginary letters and journals from friends, family, associates an enemies. This technique made famous by books like Dracula and The Woman in White is perfectly suited for an audiobook.

The performance is also great. The performer manages to read each character with a distinct voice (he even manages two change Augustus voice as he ages)

The last two chapters of this book are worth reading again and again. This book is a story or love, care, treachery, family, friendship, old age and everything in-between.

The cadence of the narrator's speech was at times annoying but the story and the structure of it was wonderful!

This is a book written in 1971 - and it shows. It would probably have been better read than listened to. I personally find letters and diary entries a rather tedious way of telling a story (there are some great exceptions, of course). Bringing in a new character writing about something no one would have written about is now way to deliver a story convincingly. I did grow on me, however and I quite enjoyed the second half of the book. This is mostly due to my fascination with the era and the characters rather than the book or the performance.

I find the structure and writing style of this book to make for an excellent insight into the life of Augustus. I would recommend having at least a relatively competent knowledge of this time period before listening to this however as it may become slightly confusing at times or characters may seem to pop out of nowhere. Overall however this book really captivates the listener and brings a feeling of closeness and almost friendship to Octavian and those he interacts with along his way to the principate.

Highly recommend for all whom love this time period.

wow, blown away and couldn't stop listening. what fantastic, intimate, insight this gives to one of Rome's true heros!

I came to this via Stoner, and very motivated as I am interested in Roman history. Having enjoyed Stoner, upon a friend's recommendation, I had high hopes. I was not disappointed. I want to shake the man's hand. To put into this form, the thoughts of Augustus and those immediately connected with him, in such detailed, compassionate and vivid terms is staggering. It took a while to get the hang of it. The slow read is not immediately gripping. If you are intending to get a 'hit' of excitement, this book will not deliver that. No action takes place. It is a slow meditative unfolding of an immense period in history from the principals involved, and whose (this is achieved so well) was always highly personal, subjective and shaped by their own personalities. It is very loving history. Williams must have loved this project to have left the midwest of America and gone to Rome to study and write this work. It is a work of art of the highest order. It would help you GREATLY to know something of the transition from Republican Rome to Imperial Rome, of how Augustus came to power through the Civil War(s) that Julius Caesar's hold on power and following assassination set in train. So perhaps, if you are a serious reader, get a little summary of that from somewhere to prep yourself and then you will be the reader that Williams wrote best for here. I loved it and will always treasure it.