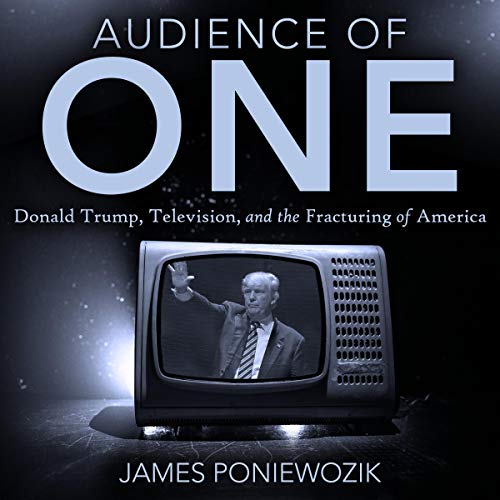 In the tradition of Neil Postman's masterpiece Amusing Ourselves to Death, Audience of One shows how American media have shaped American society and politics, by interweaving two crucial stories. The first story follows the evolution of television from the three-network era of the 20th century, which joined millions of Americans in a shared monoculture, into today's zillion-channel, internet-atomized universe, which sliced and diced them into fractious, alienated subcultures. The second story is a cultural critique of Donald Trump.

Reaching back to the 1940s, when Trump and commercial television were born, Poniewozik illustrates how Donald became "a character that wrote itself, a brand mascot that jumped off the cereal box and entered the world, a simulacrum that replaced the thing it represented." Viscerally attuned to the media, Trump shape-shifted into a boastful tabloid playboy in the 1980s; a self-parodic sitcom fixture in the 1990s; a reality-TV "You're Fired" machine in the 2000s; and finally, the biggest role of his career, a Fox News-obsessed, Twitter-mad, culture-warring demagogue in the White House.

What listeners say about Audience of One

Since we are all background character’s in Donald Trump’s 24/7 global TV show, we should know what it’s all about. Ego. Self promotion. Manipulation. All the things you’d expect are here, but I especially appreciate that this book illustrates a broader view of media and society. That’s key to understanding how you-know-who co-opted media and its best practices, along with its avid consumers, using them to create the one channel we can’t turn off. I just hope it gets cancelled soon, but I fear the ratings are too high.

When I listened to the sample I was not sure I’d like the narration but it turned out to be just right. The book is insightful and sparked by the author’s clever wit, in other words entertaining as well as interesting and informative. Whatever your opinion of DJT, it provides important observations about him as well as the impact of TV / media generally.

There are so many things to say about this book. Poniewozik takes the reader on a journey through the history of Television from its earliest days, not as a historian, but rather to discover the roots and development of its most horrific creation, Donald J. Trump. It is a terrifying ride, made more sickening by its accuracy and the reality that we have lived with every day since 2015. He traces the merger of this dreadful character with the most powerfully influential invention of the Twentieth Century. The qualities Trump demonstrates each day are not just the result of bad genes and horrible upbringing but the result of a personality disorder amplified by the power of TV. Trump saw what the Camera’s Red Light demanded and what it could do to its audience and transformed himself from just a laughable petty grifter into a manipulator capable of ripping out the Soul of a fragile Society at a tenuous time in its History. Audience of One achieves what so many Trump analyses have failed to deliver. They have talked about his childhood, his misogyny, his cruelty, ignorance and pathology, but none have identified the most powerful influence of all: Television. Poniewicz makes a convincing case for the real explanation. Trump is not only a creation of TV, he has become TV. TV at its most captivating and dangerous: the Monster that dominates all of American Life. Beware the Red Light. Turn off the TV. Read this book.

I've long been a fan of James Poniewozik's writing. So it was with great anticipation that I ordered this Audible book. Unfortunately I had two issues. One - the frequency response of the audio was not as good as other audiobooks I've listened to of late. The reader's voice sounded somewhat veiled. And more importantly, the reader of this book himself left a lot to be desired. His rhythm and cadence was...herky jerky. There were pauses in places that didn't need them. It sounded more like a lecture than a good performer telling just you, the story.

Good analysis of A troubled brain!

Trump is TV..TV is Trump. If you haven't realized we are in trouble with this man..OH WELL..

The Media Runs The Government

Great book. Interesting premise. Trump is the ultimate product of the media and the perfect blend of celebrity, brand persona, and understand er of using celebrity, the power of the red light of the camera being on to shape, not to good ends. Necessarily, the I'd and conscious of America.

Was looking forward to this book but overall it was boring and disappointing. Not sure where "the politics of illusion" were mentioned ..