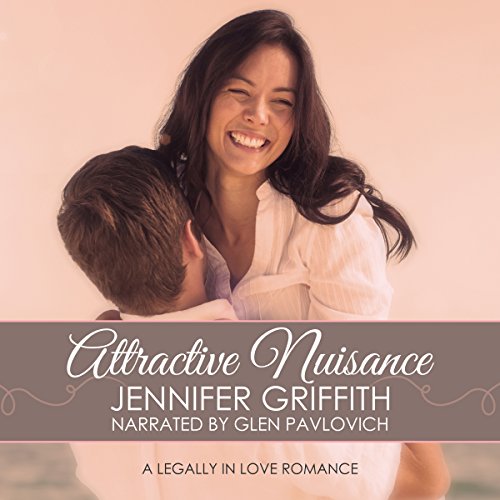 A pink-frosted doughnut with sprinkles should not make an attorney shriek in fear.

When prosecutor Camilla Sweeten sees newly hired Zane Holyoak slide a pastry from a bakery bag, her reaction is nothing close to rational. It's the exact pink doughnut from her dream where she kissed a handsome stranger! Now she's daydreaming about kissing Zane, even though he poses her fiercest competition for the Chief Deputy promotion she desperately needs.

Attorney Zane Holyoak has always gone with his gut. He's even followed it back to Yucca County, after swearing never to return. Maybe it's leading him back to fill the vacancy for Chief Deputy. If so, Zane can finally prove to his parents he's not just a disappointing kid anymore. However, one attractive obstacle stands in his way: the uber-capable Camilla.

Both are gunning for the job. So when their boss forces them to tag-team a prosecution of a known criminal, it throws them a curveball, especially as the chemistry between them rises. However, as the case unfolds, not everything about the crime, or their assumptions about each other, is what it seemed at first glance.

Attractive Nuisance is a courtroom mystery romance and Book 2 in the popular Legally in Love series by clean rom-com author Jennifer Griffith. Like her other books, it has a touch of cozy mystery and lots of swoony kisses.

Note: This second edition of this novel is a completely new story, although the characters' names have for the most part remained the same.

What listeners say about Attractive Nuisance: A Courtroom Mystery Romance

Its’s the voice that makes this story pop!

So turns out that I actually own this book in digital format but never got around to reading it, like so many books I have piling up in my kindle. Why I haven’t read it when I’ve liked all other books by this author? I don’t know. However, when the opportunity to listen to the audio book version I jumped on the chance. The story is really good. It had several twists or curveballs that I didn’t see coming. Zane and Camilla were like this awesome crime solving team. They definitely had the ‘made for each other’ romance going on. I love the scene where they go to Zane’s parents house and he is trying to talk himself into going to see them after a 8 year absence. The way everything happens just touched my heart. The dream thing was a little weird for me but overall, really good book! Loved it! The way the audio is done, with that voice, it makes the story come so much more alive. The different tones he uses, the inflection for different speakers and scenes, it all just came together really well and made me love the book that much more. Warning: highly addictive! I thought I would just listen to the book for a little bit while making lunch and before I knew it I passed the whole day doing chores with my earbuds in so I could finish the book! Thankfully I have an understanding family and it’s also baseball season for my guy! Although it turned out that I own the book and didn’t even realize it, I received a copy of this audio book from the author. My review is voluntary and my honest opinion.

A wonderfully well written clean, flirty romance. It is full of funny interactions and enjoyable banter with plenty of twists and fun lighthearted comedy keeping me engaged from the start. Zane and Camille were relatable characters with great chemistry and a fantastic group of supporting characters. I was on the edge of my seat, Zane and Camilla have secrets and confessions that need to be shared if they are ever going to get their HEA. A bonus of descriptive breathtaking scenery and a glimpse into small town life. Glen Pavlovich did an awesome job narrating this lighthearted romance making the story all the more interesting and fun.

3.5 stars I loved the end where it said the author’s husband is the lawyer she’s in love with. How sweet that her hubby’s occupation inspired these courtroom romances. I wasn’t sold on the male narrator. He did a fine job, but the main male character’s attraction to the main female character seemed pretty lusty, and may not have come across like that if it’d been read by a woman. I honestly wasn’t expecting a mystery, and that was a good addition to the story. It was nice to be kept guessing for part of the story. The relationship seemed to come on quickly, but the characters were well developed and things flowed pretty well. *I received a complimentary copy. All opinions expressed are my own.

A great lovestory with a bit of mystery

I loved this audiobook. most of the books I've listened to had female narrators so that took a little getting used to. once I did, it was great. I love this authors books and this one is no exception. I enjoyed the story and development of Zane's and Camilla's relationship. I loved that it didn't just end once they realized they loved each other. The ending felt more complete which was great!

This was a fun read and the narrator was great. I would totally go for getting more of Jennifer Griffeth's books audio. Jennifer has great characters and it was a fun mystery.

I would love to hear more of Jennifer Griffeth’s books narrated for readers - and I would not complain if Glen were the narrator. The presentation was excellent (the book flavored with Jennifer’s excellent story telling abilities coupled with Glen’s smooth, deep voice).

Finding love beyond the courtroom

This was a great story. I loved the book from the beginning and it was hard to stop listening at times. Camilla was a hardworking woman that had a past that she was trying to overcome. Zane was a fly-by-the-seat-of-your-pants kind of guy that also had a compassion for those around him. He also had a past to overcome. The opposites attract was at its finest in this book. The mystery they had to solve while fighting for the same job in their lawfirm added to the story. The chemistry between Camilla and Zane was fantastic, yet clean. The narrator was great at keeping up with the action and keeping the characters separate. I highly recommend this book to anyone that loves sweet romance that overcomes the past.

Fun, lots of great chemistry and some mystery

Camilla keeps having dreams...and they keep coming true! Ok, if that were me, I might have a little panic attack, or a giggling fit depending on the dream. Well Camilla's dreams are definitely not giggle inducing dreams, and probably not quite panic attack worthy. Definitely some swoon worthy dreams. So how does she react when the man from her dream shows up? The man she was kissing quite intently in her dream. And, when she's in her final argument in court. Oh, man. Talk about a funny scene. I would probably have been very tongue tied and shocked, to say the least. Camilla and Zane both have past insecurities and sorrows dealing with their families. They both have some healing that needs to happen, but these two were well written for each other and to be understanding and loving to help the other heal. There is plenty of chemistry in this book. I think I liked all the unexpected moments of surprise when their paths continued to cross at the beginning. I enjoyed seeing them work together through some of the more intense moments of the book. I couldn't decide what I thought of their boss, Falcon. Both Camilla and Zane, along with a few other co-workers, are candidates to fill a big position and are put through some interesting situations/tests to see who the best candidate is. Of course their boss is trying to find the best candidate but some of the ways he went about it, had me wondering about him for a little bit of the book. But as the team works together, they are able to prevail and uncover certain facts that help Camilla and Zane solve their latest case. I really enjoyed the narrator. He did a great job bringing these characters to life and adding in little things that made listening to this story a fun experience. Content: Clean. Some more intense kisses but nothing further than kissing. A couple moments of peril but nothing graphic. Happy Listening!!!

By midway through chapter three, I am laughing so hard — aloud and, by myself, mind you — that I had to put the book down for a while and hit “pause” on my Audible app. This book is deliciously romantic and totally hysterical! I just loved Camilla and Zane. Each of them has a personality that the “world” sees and yet, up close and personal, are wildly different people. In many ways, each of them are a bit lost and deeply misunderstood individuals. From the time they meet, although they are competing for the same position, the pages just sizzle with their magnetic attraction, charm and positively delightful humor. Although this is a quickly moving romance, Camilla’s “prophetic” dream prior to meeting Zane, as well as mysterious and unexpected situations thereafter, lend a good bit of momentum to the trajectory and speed of their relationship. This sweet romance will make you smile, laugh out loud, and sigh as you root for Zane and Camilla to get their HEA. This is my first time listening to any narration by Glen Pavlovich and I just want to say “Thank you, Glen! Perfectly done!!”