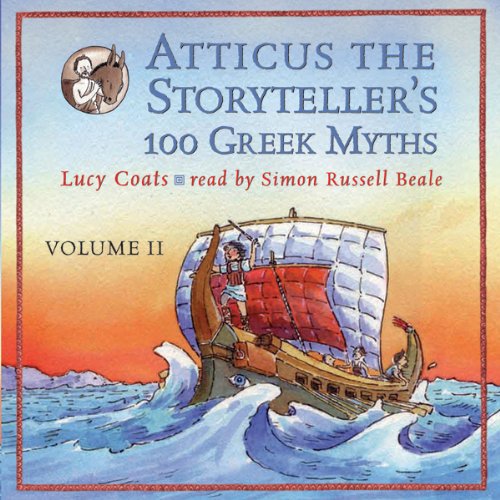 The perfect way to discover your favourite Greek myths

Atticus the Storyteller leaves his family in Crete and sets off on a year-long journey round Greece with his donkey, Melissa, to take part in the great Storytelling Festival near Troy. Wherever he goes he tells stories to anyone who will listen - sailors, shepherds, actors, athletes, children and grannies.

The stories he tells are the myths of Theseus and the Minotaur, Daedalus and Icarus, King Midas, Echo and Narcissus, Perseus and Andromeda, the labours of Heracles, the wanderings of Odysseus, and much, much more. They are linked by the story of Atticus's journey through the ancient sites where the stories originally happened. There is even a map for you to follow at www.lucycoats.co.uk Volume II contains 32 stories from the book

"The audio is better [than the print version]; it has Simon Russell Beale....His quiet, serious reading makes the OTT exploits of Zeus, Perseus, Theseus et al and the plethora of monsters, gorgons, cyclops, etc totally credible. As myths should be." (Sue Arnold, The Guardian)

This Audible Book is absolutely amazing. 🙂😀 Have listened to this loads and still love it.

This is very much a kids book. ButI would say that it gives a good introduction to the Greek myths.

I bought this audio book, download the app, and doesn't work. My child and I are very dissatisfied. I don't want membership, just to listen to THIS book. Waste of money, wouldn't be better printed books?????

What was most disappointing about Lucy Coats’s story?

Who might you have cast as narrator instead of Simon Russell Beale?