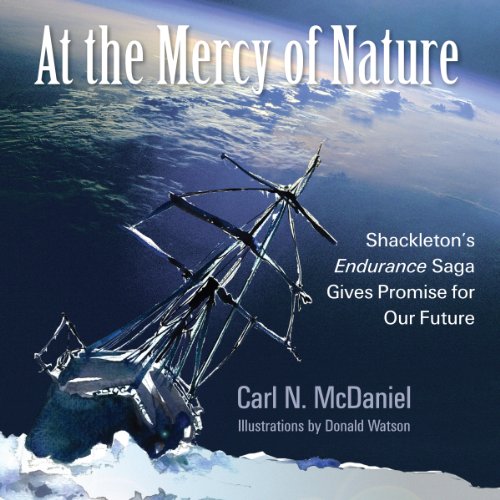 At the Mercy of Nature

The year 2014 marks the 100th anniversary of Sir Ernest Shackleton's Imperial Trans-Antarctic Expedition. On December 5, 1914, Sir Ernest Shackleton, along with 27 men aboard the ship Endurance, departed South Georgia Island in the southern Atlantic Ocean for Vahsel Bayon the northeast coast of Antarctica with the intent of trekking across the continent. On August 20, 1916, Shackleton on the Yelcho picked up 22 men on the northeast coast of Elephant Island. Between those two dates Shackleton and his men lived the most notable survival story in recorded history.

Biologist Carl N. McDaniel retells the story of the Endurance Party in detail to provide the listener with an appreciation of what an extraordinary accomplishment Shackleton and his men achieved. Individuals familiar with the Endurance Party's story have offered reasons for their survival including discipline, leadership, optimism, skills, talents, and teamwork, good luck, and supernatural forces. McDaniel considers in detail these explanations and then adds another heretofore unmentioned: use of verifiable evidence-based knowledge acquired by the scientific method for making important decisions. None of these reasons alone is sufficient; however, without McDaniel's final reason it is extremely likely they would have perished.

Humanity is challenged by a handful of interdependent situations similar to those faced by the Endurance Party including climate change, loss of biodiversity and the life support it provides, over population and over consumption, and a dysfunctional economic system. McDaniel reviews the history and relevant science for each arguing that resolving them requires we employ verifiable evidence-based knowledge.

What listeners say about At the Mercy of Nature

By far the most interesting and exciting story I have ever had the pleasure to “read”! The most amazing thing about this story is that I had to keep reminding myself that I was not reading a fiction novel. It was written so well that it is impossible to believe that McDaniel was not there with Shackleton himself!
That was the “first” story…
Then he threw in another story, a story about science that 99% of “liberals” would read and 1% of conservatives would read. Well, I am a conservative and I would not have read it…but I must say that I am glad that I did! Of course I did not agree with everything he mentioned, and connecting the two stories into one book was a little bit of a stretch for me, but the first story was so good that I had to finish the entire book…and I’m very glad that I did! I learned a lot that I would not have ever learned; call me close-minded but I simply would have preferred to read something else with my time other than something on global warming. However, it was much more than that and having that knowledge at my fingertips has enlightened me to a point in which I did not think I could get enlightened! Thank you, Dr. McDaniel, you have "nudged" my point of view on many fundamental things that have blinded me over the last decade.