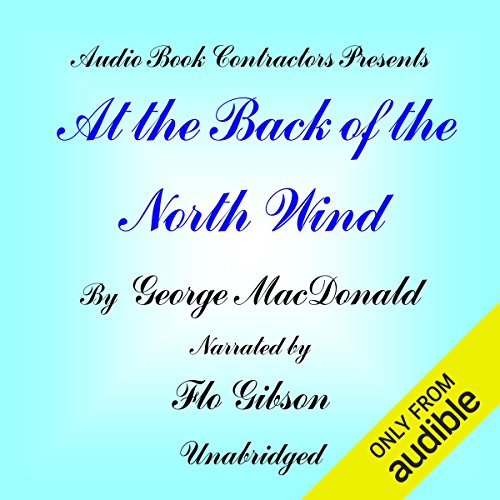 At the Back of the North Wind

This is the story of the mystical travels of Diamond, a coachman's son, through distant lands and strange events while riding on the back of the beautiful North Wind.

What listeners say about At the Back of the North Wind

When the Angels Are Too Happy to Sing Sense

At the Back of the North Wind is an enchanting book written as a fairy tale composed of fairy tales and nursery rhymes that sing and dream. But, don’t think of it as a children’s book, though it is simple enough in writing structure for the young to read. I read it first in my thirties, along with another of his works, Phantastes: A Faerie Romance for Men and Women. And, that is what they both could best be considered, fairy tales for adults. Though Fantasy tales have been around forever, MacDonald is seen as one of the pioneers of the written genre. I don’t know if the impact of the book could have been absorbed by me if I’d read it as a child.

The title, and the whole story, is a metaphor for death. The North Wind is personified as a beautiful lady, who mothers a young boy. As you read this you find yourself substituting the idea of sickness, and even death for every ride the boy takes in the arms of North Wind. He presumably needs mothering while he is in the feverish ‘ride’ of an overcoming sickness that leaves him unconscious of his own Mother’s nursing of him for long days. You know from the beginning that this child will die… will be ultimately carried away to the Back of the North Wind. And so he goes.

When Diamond, the boy, is well he is very loved by his poor parents, and they live in the barn with his namesake, an old horse named Diamond who pulls the handsome cab for young Diamond’s father the cabman. Young Diamond has that quiet wisdom of a serious child which so often shocks adults. Many of the other characters think of him as ‘not quite right in the head.’ They love him and call him ‘God’s Child.’ But, he understands all this and just laughs about it. They don’t realize he’s ridden at the back of the North Wind. He befriends other poor children, and adults who help his poor family.

But, the meaning of the phrase “At the Back of the North Wind” is explained near the end of the book to refer more generally to ‘bad fortune, evil chance, or ruin.’ But, it’s explained in such a way that you realize that sickness and bad events are merely the shadow of death, or a picture of what is at the back of the North Wind. Death will ultimately carry you there. So, the whole of the book is written as a comfort for parents who have lost a child to death, or who have a child who is chronically sick, as MacDonald himself experienced the early death of one of his children.

It also looks at the mistaken assumptions that other children can ‘replace’ lost children. The story winds beautifully through the addition of two new babies to the family. And many sad and beautiful moments are contained in the story, as when you see the North Wind sink a ship with all on board.

Here you are taking care of a poor little boy with one arm, and there you are sinking a ship with the other. It can’t be like you! -Young Diamond speaking to Lady North Wind


George MacDonald, Lewis Carroll, G. K. Chesterson, J.R.R. Tolkien, C.S. Lewis –of these great five authors, Tolkien was the only one who survived into my lifetime. Lewis died the year before I was born. These literary giants were born in the 19th century, in that order. If you recognize the last two names more, it is simply because of the century in which we were born. For, the work of every man listed was inspired by the Scottish master George MacDonald and his beloved tales. The last three grew up on MacDonald’s writing, while Lewis Carroll of Looking Glass fame had the good fortune of having MacDonald for a close mentor. Yes, mentors matter.

I read this book for the second time from a small hardbound edition, following along with the Audible narrated by Flo Gibson. It was read perfectly, with excellent accents. I do love reading metaphoric books and allegories, and I highly recommend this story for those who enjoy all fiction and fantasy writing types. The only conundrum is that while the female voice fits for the feminine North Wind, it doesn’t fit the male narrator who was telling the story in the book, George MacDonald. I would have preferred to have the narration done by MacDonald himself, but alas, he is At the Back of the North Wind.

MacDonald was a rock star in the 1800s and this story shows why. A great story very well written. I am not a huge fantasy fan, but I think fantasy fans would give it five stars.

What did you love best about At the Back of the North Wind?

The only reason I didn't give the narrator 5 stars is that she faltered a bit on the poetry.

At the back of the North wind

This book was a child's adventure. I think I was not in the proper mood to enjoy this book fully.

Flo Gibson must be an excellent storyteller in her own right. Though this book is not as deep as his adult books, Ms. Gibson brings what is there to life!