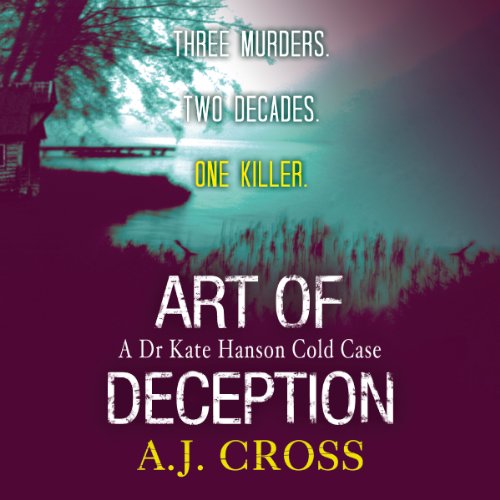 By: A. J. Cross
Narrated by: Anna Bentinck
Free with 30-day trial

The New Year brings a gruesome new discovery for forensic psychologist Dr Kate Hanson and Birmingham's Unsolved Crimes Unit. A mummified body is found beneath the floorboards of a deserted lake house in Woodgate Country Park. The dead man was art student Nathan Troy, who disappeared twenty years ago, but evidence at the scene suggests the killer has been keeping an eye on his long-dead victim.

As Kate begins to dig further into Nathan's past, she discovers a series of potentially toxic relationships. Why do his house mates refuse to talk about that time or their friendship with Nathan? And what was his connection to the beautiful and apparently promiscuous daughter of his professor? When the disappearance of a local teenager confirms that Nathan's killer is back, Kate and the team must work fast to untangle a web of lies and unmask a murderer who has lain dormant for twenty years. A chilling discovery, a young life in mortal danger, and a series of dark secrets that have been hidden for decades.

What listeners say about Art of Deception

I have not listened to the first book in the Kate Hanson series as I was a little put off by some rather negative reviews. However, the synopsis of this book appealed to me and I always enjoy Anna Bentinck's narration so I decided to give it a listen. I am really pleased that I did. Cross writes very well, with likeable and believable characters and a realistic plot that moves along at a good pace. Anna Bentinck narrates excellently and I did not share other listeners concerns about her use of accents. They are not always perfect but she has a very listenable voice. Highly recommended. Now I'm off to download the first in the series.

I absolutely loved the story itself, more so than Gone In Seconds which I also enjoyed a great deal.

Anna's narration is slightly improved here, although Connie has gained an oriental sounding accent which vanishes completely in book 3 which is rather irritating but only a minor niggle. There are less silences here in book 2 and the narration flows more freely generally.

All round, I highly recommend it.

Some inprovement in accent

The last of these stories was read so poorly that I almost didn't purchase this one. The Birmingham/Black Country accents issue has been mitigated slightly by only having a few minor characters from the area in addition to Bernie and his voice has improved a little.

The stories are engaging but I find it hard to like some of the characters, particularly Maisie who is a brat.

Excellent. A plot that keeps you guessing right until the final few chapters. If you like detective stories then you'll enjoy this.

Loved the interplay with all the good characters and wee mazzy made me laugh. Let's see more book about this trio and more from the author. Great stuff. Baz

Enjoying this series but ...

I am enjoying this series. I like the main characters, the stories are well plotted and complicated, which I love, and the narrator does a very good job (except Bernie’s accent is a bit hit and miss). And yet ... in spite of Kate supposedly being someone who understands people and their motivations in an almost superhuman way, she lets her ex walk all over her, can’t analyse her feelings for Joe or indeed her own motivations. I find that all a bit irritating. Having said all that, I am thoroughly enjoying this series and looking forward to the next one.