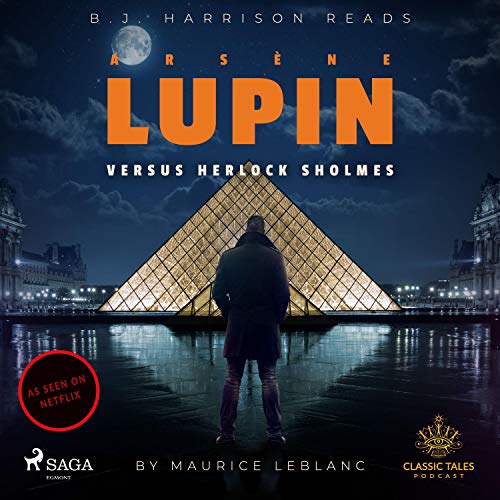 By: Maurice Leblanc
Narrated by: B. J. Harrison

From the books that inspired the new Netflix series Lupin with Omar Sy.

After Arsene Lupin is suspected of yet another grand theft with a mysterious blonde accomplice, the Parisienne police are at their wits' end. Time to call in Sherlock Holmes. Will France's greatest thief be able to outwit England's most famous detective or has he finally met his match?

Two fast-paced adventures full of twists and turns, The Blonde Lady and The Jewish Lamp will keep readers thrilled as two of literature's most cunning heroes finally come face to face.

After a debate with Arthur Conan Doyle about the use of Holmes, Leblanc showed his trademark wit by changing the characters names to Herlock Sholmes and Dr Wilson for publication.

B. J. Harrison started his Classic Tales Podcast back in 2007, soaring to the top of the iTunes charts. He masterfully breathes life back into literary classics as he plays with a wide array of voices and accents and has produced over 500 audiobooks. His productions of P. G. Wodehouse's Jeeves series and Shakespeare's Hamlet are regularly seen at the top of audiobook charts.

Now in collaboration with SAGA Egmont, his engaging narration of these famous stories is available to readers everywhere.

Maurice Leblanc was a French author during the late nineteenth century and early twentieth century. He lived in Paris during the Belle Epoque, and his literary legacy consists of novels and short stories. Though he wrote two well-received science fiction books, he was most famous for his gentleman thief adventure series, Arsene Lupin.

Thought to be based on the life of anarchist Marius Jacob, who had a very public trial in 1905, Lupin is a whip-smart, witty, and roguishly handsome master of disguise. Leblanc was compared to Arthur Conan Doyle throughout his career, and he even wrote a series of novellas where Lupin is introduced to and subsequently outwits the famous detective, Sherlock Holmes.

What listeners say about Arsène Lupin versus Herlock Sholmes