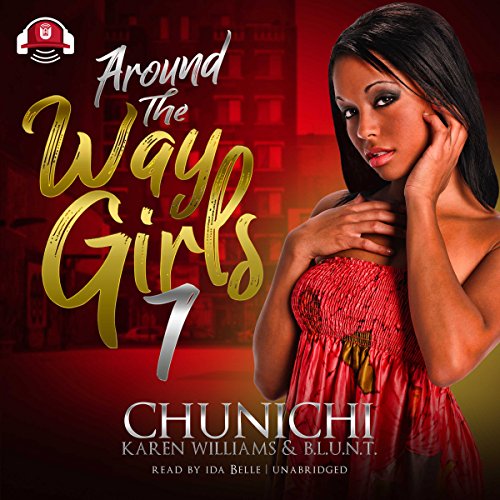 Around the Way Girls 7

Following in the footsteps of its successful predecessors, Around the Way Girls Seven showcases three popular Urban Books authors and their versions of some very tough, street-smart girls. Nina and Mouse are a couple just trying to survive the hater nation. Only problem is Nina's a little paranoid when it comes to other women, and Mouse is usually guilty as charged. Fed up with Mouse's cheating, Nina begins to creep a little herself, but will her revenge blow up in her face?

Diamond hates her messed-up life, her sorry-behind county recipient daddy, and his broke, crack-smoking girlfriend. Most of all, Diamond hates her mother, who didn't love her enough to stick around. But there are two sides to every story, and Diamond is about to hear the other side to hers.

Homegirls Whakelah, LaShawn, and Misha have big dreams to make it out of Webster Projects. There was a time their bond seemed unbreakable, but now that Misha has found love and a ticket to the big time, her friends want to go along for the ride. How far are they willing to go to chase that paper?

What listeners say about Around the Way Girls 7

I feel cheated. The last two stories were already in other novels. I’m very disappointed and want 2/3 of my money back because I got 1/3 of a story🤦🏾‍♀️

if I could give this book one star I would. The stories lacked depth or even proper plot development.... Waste of time