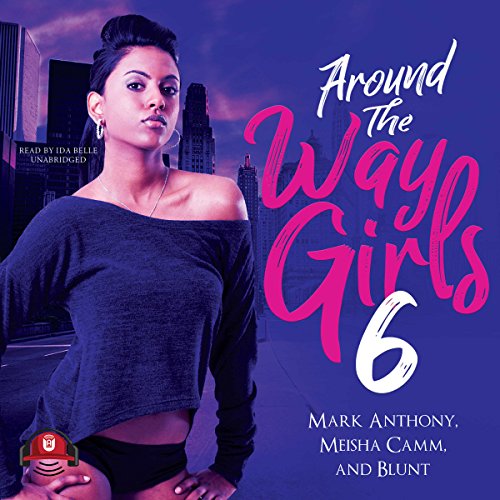 Around the Way Girls 6

Following in the successful footsteps of its predecessors, Around the Way Girls 6 features three popular authors presenting their versions of the tough, street-smart girls that everyone loves.

Yana and Kiki had to grow up much too fast, thanks to their mother's drug habit. They've got each other's backs, but even that might not be enough to protect them from the ruthless drug dealer who's got them under his thumb.

Connie is tired of struggling to get by, so when a shady corrections officer introduces her to a sure thing, she jumps at the chance. It doesn't take long, though, for her to recognize that her new hustle is bringing more drama than she bargained for.

Quiana wants nothing more than to do the right thing. After bearing witness to her mother's heinous murder at the hands of her drug-addicted boyfriend, she is struggling with the ramifications of losing the only person in the world who truly loved her.

What listeners say about Around the Way Girls 6

This Book had different stories that were good urban fiction. Stories that kept me interested and I would listen 👂 to the stories from sun up to sun down.

The narrator was one of the worst I have ever heard. There was repeated lines, which was aggravating.
Another thing is, in this series of books, it seems like there's lesbian activity in each one. I promise I could care about who do what with who in this world, but what happened to men & women in books. If I had been warned before starting any of these listens, I would not have bothered listening.
I don't want to hear about women on women. And yes I stopped listening as soon as I heard where it was going.

Ok but narration is bad

This books narration was very bad it repeats sentences as it reads every couple minutes. First story was interesting the rest were not so much plus the performance was bad.

In one of the story's, the narrator kept reading the same lines over and over

The books were great but the reading of the story was bad. She kept miss reading and it kept repeating several times.

Ida Belle ruin every book she read!! Like why are you pausing like the story has came to an end? With a better narrator I definitely would’ve gave five stars!