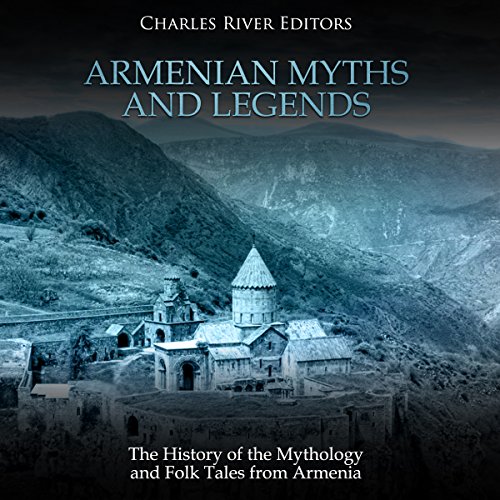 The History of the Mythology and Folk Tales from Armenia
By: Charles River Editors
Narrated by: Colin Fluxman
Length: 1 hr and 9 mins
Categories: History, Ancient
5 out of 5 stars 5.0 (1 rating)

Armenia is considered to be one of the oldest cradles of civilization, with the area of historical Armenia roughly extending to the area stretching from the Euphrates River in the west, the region of Artsakh, parts of Caucasian Albania to the east, parts of the modern state of Georgia to the north, and its southern boundary abutting the northern tip of Mesopotamia. Armenia is a landlocked mountainous plateau that rises to an average of over 6,000 feet above sea level, and for this reason, the territory was commonly referred to as the Armenian Highlands. In these highlands, Armenian culture, as well as its language, started to develop.

Rich cultural material, mythological and legendary tales, toponyms and names, as well as historical sources serve as evidence the Armenian Highlands have been inhabited by Armenians since the dawn of time. Like many other people all over the world, Armenian people also created their own mythology and heroes. The first pantheon of the Armenian pagan gods had gone through its formation parallel to the development of the Armenian people as a consequence of the religious beliefs the people bore.

Before being the first kingdom to convert to and accept Christianity as its religion in the year of AD 301, Armenians were pagan and believed in a multitude of gods and goddesses. These were attributed with many natural elements. The main sources that have conveyed the Armenian pagan myths and legends to the following generations are the Armenian historians of the fourth to seventh centuries, such as Agathangelos, Faustus the Byzantine, Movses Khorenatsi, and Sebeos. Another prime source containing many clues that helps us grasp and comprehend these myths and legends is the Armenian national heroic epic Daredevils of Sassoun.

Armenian Myths and Legends: The History of the Mythology and Folk Tales from Armenia looks at the stories that came from Armenia in ancient times, including their influences from other cultures. You will learn about Armenian mythology like never before.

What listeners say about Armenian Myths and Legends

I came, I tried, I will return the book.

The stories are fascinating but I felt like I was listening to a boring lecturer or a news story that never ended. I looked up Colin Fluxman and he is indeed a former news anchor. Everything flowed in a manner that was not good. Fluxman's voice is great-- but he needs a director to break down the stories or chapters, and an optional slide show. His voice has a limited range.

The contained information is great for someone doing a story about Armenia, or about the related myths of lower Europe and Mesopotamia. The stories overlap and we learn a great deal about the temples and the influence they would have as Christianity took over. I would probably get this in the Kindle version if I were taking a class on Armenia unless the Audible gets more vocal variations. .