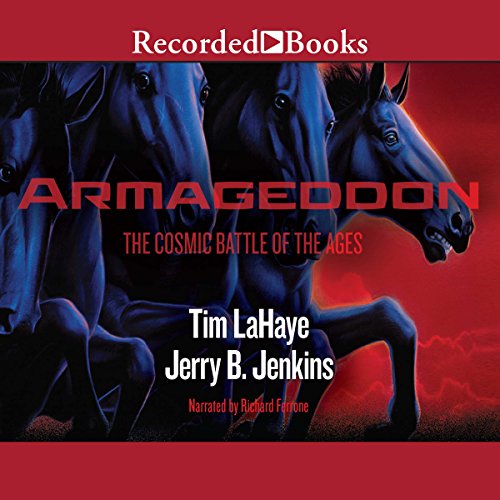 By: Tim LaHaye,Jerry B. Jenkins
Narrated by: Richard Ferrone

Armageddon, the thrilling eleventh book in the best-selling inspirational series of all time, with over 40 million copies in print, continues the sweeping, apocalyptic saga of the end of time on planet earth and reaches new heights with a story listeners will never forget.

It is the final year of the Great Tribulation. The Tribulation Force is holding out in their San Diego safe house, but in reality, there is no place left that can be called safe. All the world's remaining armies have gathered in the Middle East, poised for the battle of the ages and preparing for the mighty beasts of the apocalypse. The wasted shell of once-beautiful planet Earth has been reduced to a ticking time bomb, staggering under the weight of judgments from heaven. Mankind is hurtling toward the Battle of Armageddon and the ultimate showdown between the forces of good and evil. Who will survive at the end of the world?

If you keep in mind that this is fiction based on the Bible you will have the right frame of reference. While a lot of the story does have ties back into the Bible it does not intend on replacing it. Its an easy place for some to "get the bug" for faith although ultimately they need to be pointed to the only true authoritative source, the Bible.
I thoroughly enjoyed the series and recommended it to many friends. Unlike the movies, I found the books well done, and well produced.

This series should have ended a long time ago

Like most people I love this series - the first 4 or so books were great but these later ones make entire story lines out of the smallest "incidents" and it's clear the author(s) are struggling to keep the series going. Armageddon isn't even a story - you could completely skip this book and still walk away from the series without having missed anything significant. I will keep listening to the end - but this book (and the last 2) have been terrible. If only they could all be as good as the first 4.

loved it. The reader did a great job reading the story. will read next book

The best one yet!

I love this series! I think they did an awesome job. they keep me listening and are books I will listen to again

I love the Left Behind series. But it drives me crazy how Farone says Petra. It is pronounced Pay-tra not Pee-tra

I'm about to start the last book in the series... Don't know if I'm happy about it or super sad about it! I have really enjoyed every one of the books and the entire series thus far. I highly recommend this to anybody especially anybody that is new in faith or just sitting on the outskirts of having faith. glorious appearing here I come!

Wonderful book. Inspirational read. suspenseful, kept you on edge. you will fall in love with the heros

Not a fan of this narrator, he mispronounces words, like the other guy but they have totally got rid of him including the books I have . Not good

This book follows the remaining members of the Trib Force in the last days. It is just as good as the previous books, but for some reason Richard Ferrone decided to change it up. It is actually horrible. So horrible that I will just buy a paperback of the last book instead of listening to it. He tries to give accents to some characters sometimes, but they are awful. All the foreign accents are AWFUL. Terribly distracting. It's as if he just gives up trying.

Ultimately, the change of narrator at the 3/4 mark of the series was a serious mistake as it has shaken up listening expectations. The other narrator did a good job of differentiating the voices even though it was comical at times, but RF tries something similar and fails. It makes the book painful to listen to. Very disappointing.

You can feel the conclusion is coming!! As the climax of the series revs up it leaves me rushing to the next book in the series!!! I can't stop listening to this series!

Great narrator, amazing story. So addictive. Great fun to listen when doing other things. So recommended