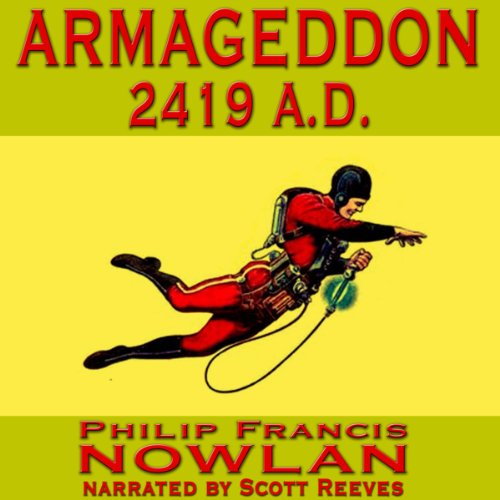 Mining engineer Anthony Rogers is trapped by a mine collapse and falls into a state of suspended animation due to the presence of radioactive gases. He awakens nearly five hundred years later, to a United States that has been conquered by the Chinese. Using his 20th-century military knowledge, he helps the down-trodden Americans take back their country.

What listeners say about Armageddon 2419 A.D.

Problem with this book

This unabridged version is only the first 6 chapters of the book.
My husband was really looking forward to hearing this book as it was one of the first books he read, after he learn to read in his early twenties. He has reread this book many, many times and he loves the story. But he is so disappointed in both the choice of the narrator, and the cut in the book. The narrator showed almost total disinterest in the story and it sounds like it was recorded in a cupboard. His copy of the book printed in 1962 has 18 chapters an Epilogue and Afterward. His question is why doesn't this one? This is why he has given it such a bad review, not the fantastic story, just what has been done to it. He is very disappointed, This audio book is not up to Audible's usual high standards.

Simple answer is a decent narrator. I'm sorry but the reading is pathetic.

What other book might you compare Armageddon 2419 A.D. to and why?

Who would you have cast as narrator instead of Scott Reeves?

If you could play editor, what scene or scenes would you have cut from Armageddon 2419 A.D.?

It's hard to say as this is an old Novella and (as noted) the reader destroys almost any enjoyment value to be had.

Good book (I read it years ago) EXTREMELY POOR READER.

Okay, I admit it - This is going to be an extremely prejudiced review, and with good reason.

Nowlan was SO far ahead of his time with this novel, and now, an audiobook. Written in 1928, it was extremely far ahead for its time, and very well written. Edgy, cool and well-thought out for it's time.

I'm sure you've read the synopsis, but that's only the beginning of the story. From small squad fighting in the mountains, to rebel bunker life and warfare, to massive rocket battles sweeping the landscape, to high subterfuge deep within the Han palace, which stands on the remains of a once proud America, you are in for a ride.

This was the standard by which Buck Rogers was birthed. It changed a movie-going nation, and stirred the hearts and imaginations of people across the country that watched those short serials. They waited for the next in the series - And the next.

However, the serials couldn't capture the scope and drama of the book. It's a page-turner, and in this case, a wonderful listen.

Now, keep in mind the following - First and foremost, the narrator isn't stellar - at all. Reeves wouldn't have been my first or even second choice. A solid Dotrice would be excellent for this, Nolan's literary genre-building mark on science fiction. And, second, it's not a long novel. Still, great things come in small packages.

However, to show you how much of an impact this novel had upon me, I still have the faded, page worn copy from the seventies. I've read it many times since then, and this audiobook was a must have. A must listen. And TOTALLY worth it.

If you doubt this, go look at all of the write-ups and wiki articles on the work. They still rave on Armageddon 2419 A.D.

Dated? A bit. Older tech? Yep, but in a grand apocalyptic way, it actually makes sense.

Quite simply, this is iconic. You owe to yourselves to hear this audiobook.

I felt as the book itself didn't have much character depth. it's also dated in the sense that this book was written in a time that there was more racisim and contention between world powers.

I do not write reviews but this was one of the first books I read as a kid. Loved it then, still love it now, but the reader has to go. Not sure why they picked this guy. He has no character voices and very boring to listen to.

The book though is great. Definitely worth the read.

This story was so good! I really liked all of the scientific descriptions and the fast paced future action. However, the narrator sounds as if he is talking through a tin can for the entire recording. I'm not sure if this was intentional in order to simulate the sound of old school radio dramas, but even so it sounds like crap. This book deserves a better production than this one.

Not worth listening to...

Unfortunately this book falls very short of something interesting. The reader is ok but doesn't give much In the way of performance. The book itself is just not interesting as it talks about things in the future but then flashbacks to a period prior to when the protagonist is currently in. It just seems to end without and rhyme or reason but that was because the plot just didn't have any meat in it.
I wanted a Buck Rogers Book but I got a watered down Tony Rogers narrative.

No enthusiasm or joy in reading this book.

I tried three different times to listen to this book. The biggest problem is the reader seems to have no energy or enthusiasm for his reading. It is as if the reader is just bored with the material and did this for the payment. No attempt to provide different tones for different characters nor different volumes to cover things like inner monologue or even to separate narrative from character roles. All three times with this boring reading I was fast asleep by chapter 2 of the book. Which is dangerous because I listen once while trying to drive on a vacation.

Then there is actual record itself doesn't sound professional at all. It sounds as if the reader just recorded it off a built in computer speaker like some of the start up YouTube artists or in some poorly sound proofed room where the microphone picks up the reverb off the walls and everything. It has an almost tinny sound going on. Most of my other audible books sound rich and full of the speaker next to me, not phoning it in via speaker phone.

The story is good if you know early sci-fi this is the book that introduced Buck Rodgers. The other spaceman in fiction besides Flash Gordon and the later Star Trek/Star Wars leading heroes. Good book for the setup and telling of the story. Just bad record of the story. kinda of miffed I wasted a free credit on this.

Don't listen to this when you're driving, it nearly put me to sleep. The narrator sounds like Stephen Hawking's wheel chair and the story is a technical manual for analog futuristic spyware.