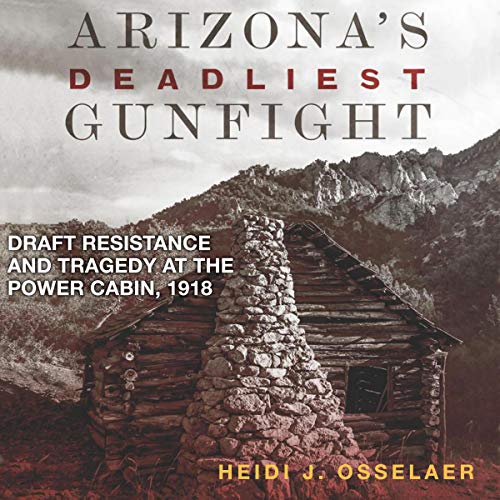 On a cold winter morning, Jeff Power was lighting a fire in his remote Arizona cabin when he heard a noise, grabbed his rifle, and walked out the front door. Someone in the dark shouted, “Throw up your hands!” Shots rang out from inside and outside the cabin, and when it was all over, Jeff’s sons, Tom and John, emerged to find the sheriff and his two deputies dead and their father mortally wounded.

Arizona’s deadliest shootout happened not in 1881, but in 1918 as the US plunged into World War I, and not in Tombstone, but in a remote canyon in the Galiuro Mountains northeast of Tucson.

Arizona’s Deadliest Gunfight describes an impoverished family that wanted nothing to do with modern civilization. Jeff Power had built his cabin miles from the nearest settlement, yet he could not escape the federal government’s expanding reach. The Power men were far from violent criminals, but Jeff had openly criticized the Great War, and his sons had failed to register for the draft.

To separate fact from dozens of false leads and conspiracy theories, Heidi J. Osselaer traced the Power family’s roots back several generations, interviewed descendants of the shootout’s participants, and uncovered previously unknown records. What happened to Tom and John Power afterward is as stirring and tragic a story as the gunfight itself.

“The best, clearest, and most objective account of the event. From now on, it will be the definitive source on the tragedy.” (Thomas Cobb, author of With Blood in Their Eyes and Crazy Heart)

“This is nonfiction at its finest.” (Carlos A. Schwantes, author of In Mountain Shadows: A History of Idaho)

Osselaer has done an excellent job telling the story about Jeff Power and his sons. The sheriff and three deputies traveled at night in the winter to a remote cabin in the Galiuro Mountains and started shooting as the father stepped out of the door on his way to the outhouse in the morning. In the end four men were dead. The author analyses why this happened in 1918.

The book is well written and meticulously researched. Osselaer follows the Power family from Kentucky to Arizona over several generations. Events leading to the shooting, the shooting and the aftermath are told in details and analyzed. The author reveals how the change in attitude of society with the Viet-Nam War brought about a change of attitude regarding the Power Brothers. The fight at the OK Corral is more famous, but this fight in the Galiuro Mts. is equally exciting and as controversial.

The book is almost ten hours. Ted Brooks does a good job narrating the book. This is my first time listening to Brooks narrate.