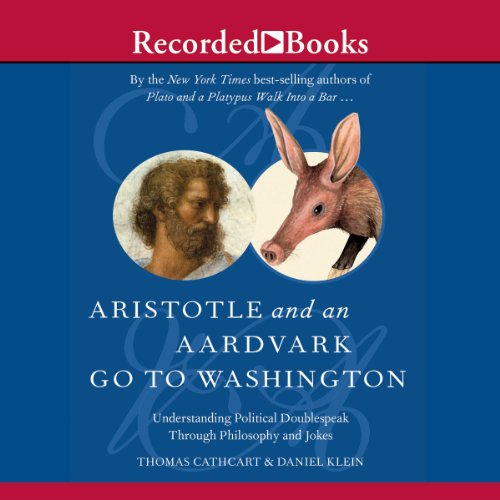 Aristotle and an Aardvark Go to Washington

Thomas Cathcart and Daniel Klein, authors of the national best seller Plato and a Platypus Walk into a Bar, aren't falling for any election year claptrap - and they don't want their listeners to either! In Aristotle and an Aardvark Go to Washington, our two favorite philosopher-comedians return just in time to save us from the doublespeak, flim-flam, and alternate reality of politics in America.

Deploying jokes as well as the occasional insight from Aristotle and his peers, Cathcart and Klein explain what politicos are up to when they state: "The absence of evidence is not the evidence of absence" (Donald Rumsfeld); "It depends on what the meaning of the word 'is' is" (Bill Clinton); or even, "We hold these truths to be self-evident...." (Thomas Jefferson, et al).

Drawing from the pronouncements of everyone from Caesar to Condoleeza Rice, Genghis Kahn to Hillary Clinton, and Adolf Hitler to Al Sharpton, Cathcart and Klein help us learn to identify tricks such as "The Texas Sharpshooter Fallacy" (non causa pro causa) and the "The Fallacy Fallacy" (argumentum and logicam). Aristotle and an Aardvark is for anyone who ever felt like the politicos and pundits were speaking Greek. At least Cathcart and Klein provide the Latin name for it (raudatio publica)!

What listeners say about Aristotle and an Aardvark Go to Washington

If you're interested in learning about fallacies, this is an excellent book to start with. The authors bring humor to fallacious political statements.

not as good as plato and a platapus

Not as good as their other book and not nearly as funny. Seems like they could of used a little more balance in their perspective as well.

If your getting this book because you enjoyed Plato and a platypus... you may be disappointed. It’s not as funny, got fewer jokes, and is not as well structured. But the one with Aristotle and the Aarvark was good - Alexander the Mediocre, haha!

Less interesting and a lot less funny than their previous book - Plato and a Platypus Walk Into a Bar. Probably because I don't live in the USA. But the narrator is really excellent.

Jokes and Philosopy --Neither!

I expected humor by the title and discussing philosophy is usually interesting and educational --this book was neither one. The jokes (as far as I got into it) were old and what the authors called philosophy, I would call ad hominem political attacks and just plain bias. Not that I didn't agree with some of the criticism of those being attacked here --it was just done poorly and without style.

Read the first in the series and found it interesting. This book, however, turned into one man's political opinions. Just one more tired slash at conservatism and religious principles. Very tiring rhetoric. The only thing "Aristotle and an Aardvark" has to offer is a new cover to the same old philosophy. Sorry I spent the money.