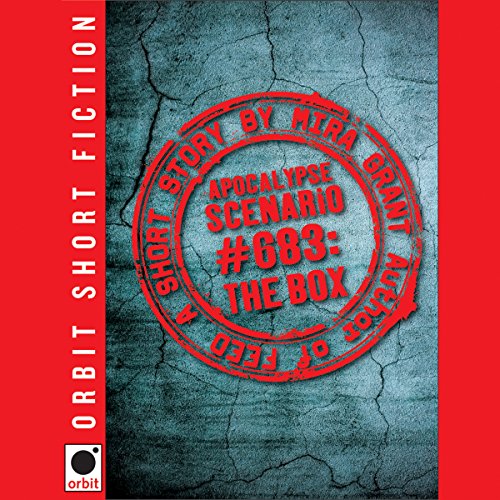 A short story from the New York Times best-selling author that brought you Feed, Mira Grant.

Every week five friends get together to play a game - a game they call the Apocalypse Game. It's a fun time with chips and beer and plotting the end of the world. Except this time, one of them is missing and the stakes are higher than ever before.

What listeners say about Apocalypse Scenario #683: The Box

Interesting Short story. Enjoyed the twist on the Apocalyptic genre. Was quite impressed with the author's narration. Seems Mira Grant can do it all.

loved this story. it Drew me in and I totally forgot I was just a short story.

A Game I Don't Want to Play. Maybe.

Would you consider the audio edition of Apocalypse Scenario #683: The Box to be better than the print version?

I think I would prefer the print version, just so I could have read it slower to digest it more.

Probably the narrator of the game. Rita gave a really good performance for her.

Have you listened to any of Mira Grant’s other performances before? How does this one compare?

Haven't heard anything else from her.

I think I did listen to the whole thing in one drive. Pretty short, but the perfect length.

The only thing I would have liked (and it may have been in there, but I missed it due to being tired) was a little more explanation of The Game's rules in general. Not for this specific scenario, but just in general, as they had played it for years and should have concrete, established rules. What was the goal of The Game? How were winners determined? Are the players trying to figure out just how to survive the apocalyptic scenarios, or to stop them? I ask this because this sounds like a game I would like to play.

cuts right to the nucleus. does not mess around. 22 minutes may seem like "too short a short story.". like Goldilocks and the Three Grizzly Bears... it doesn't take that long to finish what you came for... if it is prepared and presented well.

This is a very short, short story.

It was good, as long as you knew what it was about before you listen to it.

I dont think it would make much sense if you didnt know about the series.

such a great short story.

This story has a mighty need of q full length trilogy. APOCALYPSE SCENARIO #683: The Box lays the foundation for an epic story. I am so hooked. Please @seananmcguire /Mira Grant, give us MORE!

Certainly an interesting short story and if it was fleshed out more it could have been a great novel.

If you could sum up Apocalypse Scenario #683: The Box in three words, what would they be?

What does Mira Grant bring to the story that you wouldn’t experience if you just read the book?

She wrote the story so she knew the characters. As she read the text she brought them to life and made me care about them and forget that they were not real.

If you could rename Apocalypse Scenario #683: The Box, what would you call it?

Nothing, I love the title!

Great short story I would love to have more the scenarios done as stories or for a squeal to find out what the group decided.

Very thought provoking with a Twilight Zone feel at the end. Mira Grant is an amazing author and the narration was flawless. Nice to hear an author reading her own work, and doing it well!

This could be the next great apocalyptic story

Please find more of my reviews at audiobookreviewer dot com

Apocalypse Scenario #683: The Box the most tense 22 minutes that I can remember having in a long time. While this is not a complete story, it ends perfectly and left me breathless. The plot unfold quickly, builds to a climax and boom it's all over. If expanded upon this could make a fantastic new full length audiobook. I am not disappointed at all, if all novellas were this good, they just might be the only thing I ever listened to. If need a quick fix of apocalyptic suspense, look no further, you will not be let down.

I am so impressed my the narration skills of Grant, most of the time when authors narrate their own stories it leave something to be desired, as they are not professional voices. I really do not think that her performance could have been improved in any way whatsoever. Mira please feel free to narrate more of your stories, I will be maybe not first in line but as close as I can get.