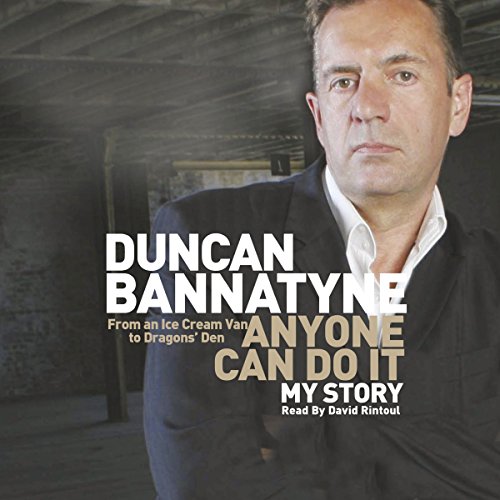 Anyone Can Do It

At 30, Duncan Bannatyne had no money and was enjoying life on the beaches of Jersey. He saw a story about someone who had made himself a millionaire, and decided to do the same. Five years later, he had done it, and now he is worth £168 million.

In this remarkable book, Bannatyne relives his colourful path to riches, from ice cream salesman to multi-millionaire, explaining how anyone could take the same route as he did, if they really want to.

Hugely articulate, and with numerous fascinating and revealing stories to tell, this is an autobiography and a business book unlike any other. But then, Bannatyne isn't like any other businessman, either.

What listeners say about Anyone Can Do It

thanks Duncan, great book. really enjoyed listening to it as well as learning from you.

Very interesting man and a very inspiring story, I thoroughly enjoyed this audiobook and would happily recommend to anyone with an interest in either business or in rags to riches stories.

Great inspiring story for entrepreneurs. Above all, the narrator's accent and enthusiasm while telling the story is contagious.
If you're looking for "business secrets", this is not for you. But if you want to crack up and enjoy a good tycoon story, this is light, fun, enjoyable and inspiring.
A definite thumbs up!

The book is a perfect motivator for someone who loves entrepreneurship and business. More insight would definitely add value to it. Would love to see more from Duncan.

I've always admired the public persona of Duncan Bannatyne, since first seeing him on 'Dragons Den', but I didn't know very much about him. I just knew he was a highly successful multi-millionaire with a straight, no-nonsense approach to everything. It's how I wanted to be. Then I bought 'Millionaire MBA' and there he was again - straight-talking, full of common-sense business advice, and a mentor from that point on, albeit at arm's length.

This superb book uncovers the compassion and real humility of the man. It's a great shame it wasn't read by him as well, as I think his great energy is understated and diluted by the narrator. Nonetheless it's a great book about a truly great British entrepreneur and an inspirational, world-class business leader. Whenever I see or hear the words 'Anyone Can Do It' I am usually very sceptical and push my wallet and credit cards deeper into my pocket as I prepare for the 'sales pitch'. This book just isn't a pitch for anything; instead it is a highly motivational, humorous and engaging story of an ordinary Brit with extraordinary drive and determination. Duncan Bannatyne could successfully convince anyone with even modest aspirations to 'go for it', to believe in themselves and the fact that 'Anyone Can Do It'. Thanks Duncan! Highly recommended.

There are 2 great aspects of this book - one is that the story of Duncan's progress is truly inspiring to the common man i.e. you and me can connect to the situations that Duncan went through, we can connect to his thought process which is no \"great shakes\" but simple logic - hence the title \"Anyone can do it\" is a perfect reflection of the message in the biography. Secondly the style in which the book has been written/read conveys the message in simple, common man language and gives you a strong adrenaline kick which urges you to start thinking about doing your own business - simply because 'anyone can do it'. Good Luck!

All in all it was well spent time. But I would have loved a bit more information on how he started his first businesses. It seemed very compressed to me and I heard not so much about any obstacles and troubles. I think most people would like to hear more about the first million than about the rest.

As I said, a bit more detail.

Could listen to it again.

Duncan Bannatyne gives a truly interesting and honest look into his life from being a young boy with very little to being the highly successful multimillionaire that he is today. From the brief to long term relationships he’s had with family and friends to why to chose certain paths in life that he did. He asks himself quite sensible questions that we could all ask ourselves such as, ‘why not?’ And questions the way deals are made in an obvious way that don’t seem to have been questioned before.

In conclusion, I really enjoyed it and I think I will give it another listen.

I’m 35 years old and have numerous young businesses which are really starting to take off! This book has inspired me that I really can do this and to continue working hard! I actually got offered a role by one of Bannatyne’s leading people in his gym’s but I politely turned it down to focus on my own entrepreneurial journey. Best decision I ever made! That being said, Bannatyne has been a huge inspiration to me.

I would recommend anyone in business or starting a business to read this book. Anyone can do it and Duncan shares his story to prove it!

Consise & to the point. Learnt lots!

The only disappointment is that Duncan didn't read it. I love to hear the authors voice.

The book provides context from the beginning by explaining the period in Duncan’s life, before delving into what he did to apply himself and progress his career. It really shows how anyone can start from nothing and, by investing time and effort and by believing in yourself, you can build your prospects and achieve. Very inspiring and a great read/listen for anyone, whether you’re just starting out in your life or you feel you’ve reached your potential.

Duncan Bannatyne tells his life story opening up on some of the toughest moments of his childhood. Understanding his background and the events that he had to go through, make it easier for the reader to realise what motivated him to be the successful man he is today. Duncan also opens up about some charity projects he has done and gives advice to entrepreneurs. If someone like me, that had to go through what I did, did it, then anyone can!

A great story if nothing else but really inspirational and valuable for any aspiring entrepreneur. Go Duncan!