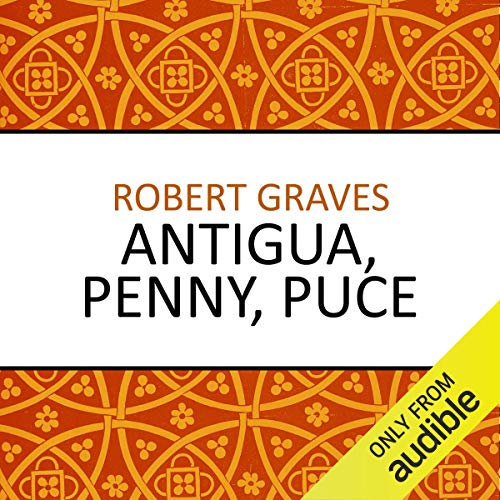 'Lot 50: The rarest and most beautiful stamp in the world. The Venus de Milo of Philately.’

That was how the auctioneer announced it, and from that moment the feud began in earnest, for as children they had agreed to share Oliver‘s schoolboy stamp collection, and Jane now wanted her rightful share. So the Antigua, Penny, Puce became the focal point of their rivalry, with each one resorting to every refinement of malice, mockery and sabotage until the law stepped in, and with a strange quirk of fate decided the Battle of the Stamp - and the running Battle of the Sexes.

Robert von Ranke Graves (24 July 1895 - 7 December 1985) was an English poet and novelist, scholar, translator, and writer of antiquity, specialising in classical Greece and Rome. During his long life he produced more than 140 works. Graves' translations and innovative analysis and interpretations of the Greek myths, the memoir of his early life, Good-Bye to All That, and his speculative study of poetic inspiration, The White Goddess, have never been out of print.

Graves earned his living by writing popular historical novels, including I, Claudius (for which he was awarded the James Tait Black Memorial Prize), King Jesus, The Golden Fleece and Count Belisarius. He was elected Professor of Poetry at Oxford in 1961 and made an honorary fellow of St John’s College, Oxford, in 1971.