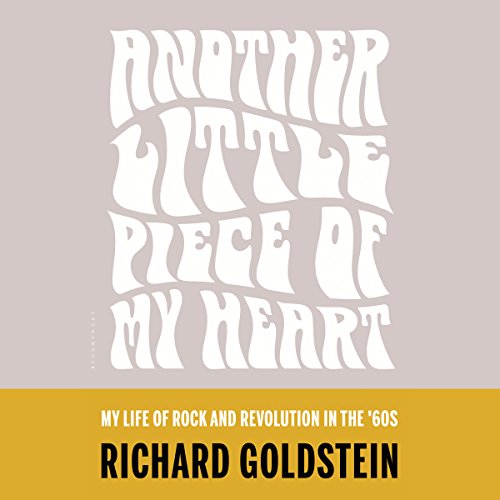 Another Little Piece of My Heart

In 1966, at the ripe age of 22, Richard Goldstein approached The Village Voice with a novel idea. "I want to be a rock critic," he said. "What's that?" the editor replied.

It was a logical question, since rock criticism didn't yet exist. In the weekly column he would produce for the Voice, Goldstein became the first person to write regularly in a major publication about the music that changed our lives. He believed deeply in the power of rock, and, long before it was acceptable, he championed the idea that this music was a serious art form. From his unique position in journalism, he saw the full arc of events that shaped culture and politics in the 1960s - and participated in them, too.

He toured with Janis Joplin, spent a day at the Grateful Dead house in San Francisco, and dropped acid with Brian Wilson and the Beach Boys. He was present for Martin Luther King's "I Have a Dream" speech, the student uprising at Columbia, and the riots at the 1968 Democratic Convention. He was challenged to a boxing match by Norman Mailer and took Susan Sontag to her first disco. Goldstein developed close relationships with several rock legends - Janis Joplin and Jim Morrison, to name two - and their early deaths came as wrenching shocks, fueling his disillusionment as he watched the music he loved rapidly evolve from a communal rite to a vast industry - and the sense of hope for radical social upheaval fade away.

Another Little Piece of My Heart is the intimate memoir of the writer as a young man with profound ambition. It is also a sweeping personal account of a decade that no one else could provide - a deeply moving, unparalleled document of rock and revolution in America.

"A deeply felt and largely compelling portrait of an age that indelibly marked everyone who took part in it. Indispensable for understanding the culture of the '60s and the music that was at its heart." (Kirkus Reviews [starred review])

What listeners say about Another Little Piece of My Heart

Undeniable story that can span generations.

Amazing story. The kind of struggle that can span generations. Something the current alternative culture can relate to and a life their parents lived. Maybe they can better understand each other through Goldstein's story.

Impressive how self aware the author is of himself and how truly he can capture the flaws of even his idols. Insightful perspective to the rockers like Joplin, Morrison, Dylan, Jagger, etc that no one else has revealed in their grounding vulnerability that led to their downfall, fame, or both.