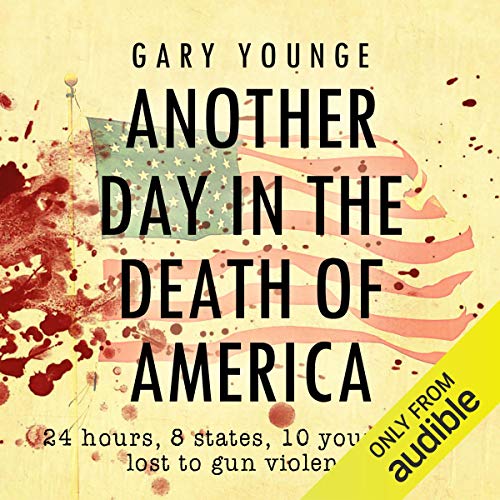 Another Day in the Death of America

Short-listed for the Orwell Prize, The Jhalak Prize, The CWA Gold Dagger for Non-Fiction and The Bread and Roses Award.

Saturday, 23rd November 2013. It was just another day in America. And as befits an unremarkable day, 10 children and teens were killed by gunfire. Far from being considered newsworthy, these everyday fatalities are simply a banal fact. The youngest was nine; the oldest 19. None made the news. There was no outrage at their passing. It was simply a day like any other day.

Gary Younge picked it at random, searched for the families of these children and here tells their stories. Another Day in the Death of America explores the way these children lived and lost their short lives, offering a searing portrait of the vulnerability of youth in contemporary America.

What listeners say about Another Day in the Death of America

loved it, sad but reflecting reality and where society is heading in general. Recommend to read it.

I actually have a physical copy of this book but got the audible version anyway. Very moving stories that are represented with a lot of depth and respect. I did feel there were times that when drawing his own conclusions he be became a bit unnecessarily wordy for the sake of wordiness, rather for the sake of being concise. Gary Younge is British, I would loved to at least have him do the foreword or have a British narrator to remind the listener that, although familiar with American culture, he did view it from an outsider's perspective.

Everyone should read or listen to this

Vividly and meticulously depicts the aftermath of the avoidable violence caused (at least in part) by America's obsession with the right to bear arms.