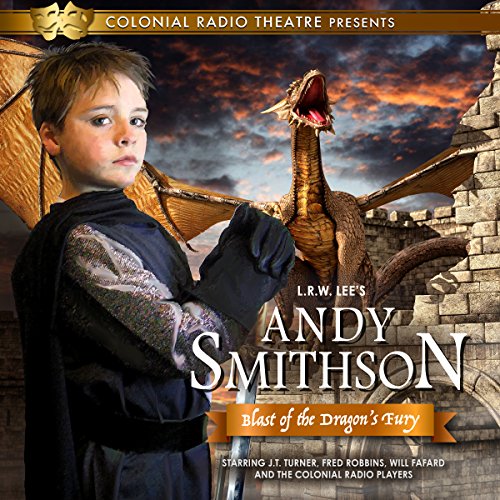 A full cast audio drama recording of LRW Lee's popular Andy Smithson series! In Blast of the Dragon's Fury, an otherworldly force draws him to a medieval world where fire-breathing dragons, deranged pixies, and vengeful spirits are the way of things. Trading his controller for a sword of legend, Andy embarks upon an epic quest to break a centuries-old curse oppressing the land. It isn't chance that plunges him into the adventure though, for he soon discovers ancestors his parents have kept hidden from him are behind the curse.

From the award winning Colonial Radio Theatre, Blast of the Dragon's Fury is an exciting adventure told with thousands of sound effects, full music score, and a cast of actors that bring LRW Lee's colorful characters to life.

What listeners say about Andy Smithson: Blast of the Dragon's Fury

The many different voices and the sound effects make listening to this story even better than reading it on my own. The story plot, the characters, and the adventures will sure to please kids. Humor, light suspense, great dialogue, and wondrous creatures will thrill even more. Great book!