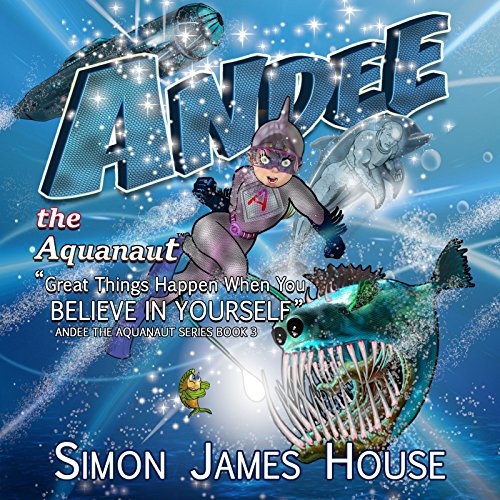 The fast action of the Andee the Aquanaut series, for children aged eight and older, continues as Andee faces daring and turbulent new adventures with mythical creatures of the sea. But this time he is not alone.

In Book 2 Andee met Zoran and Moorlark. They were sent to help him on his quest to end evil Zadora's plans to overthrow the oceans. He also discovered the Dolphinoids, a super intelligent race of beings who serve to keep the oceans thriving among much adversity. Upon saving thousands of cruise-ship passengers, Andee was captured by the evil Zadora and taken to her watery prison. But just moments before his capture, Andee "accidently" blessed a paralysed young girl, India. Neither of them had any idea what would happen next.

Chained and broken, his spirit destroyed by evil Zadora's horrid goblin sharks, Andee hangs lifeless in a watery, cave like prison beneath treacherous, stormy skies. The wise white dolphin, Moorlark, and Zoran plan his rescue. But to their great surprise, a new hero has been born.

Above the surface Andee's parents work with Richard the super scientist in the island's laboratories. They're attempting to discover more about the rapidly disseminating oceans...and the whereabouts of Andee. They have no idea that an evil mermaid could be responsible for the sudden degradation of the seas. When the time comes for them to search for Andee, after receiving confirmation that he is indeed alive, Richard reveals one of technology's most outstanding accomplishments - one that he himself created to help them on their quest.

As the evil Queen Zadora carries out her plan to mine the ocean for all the gold and minerals it has, the mammoth quest to rescue and restore Andee to health also begins.

Will Andee be saved? Will Zadora and her merman army be stopped?

What listeners say about Andee the Aquanaut: Great Things Happen When You Believe in Yourself