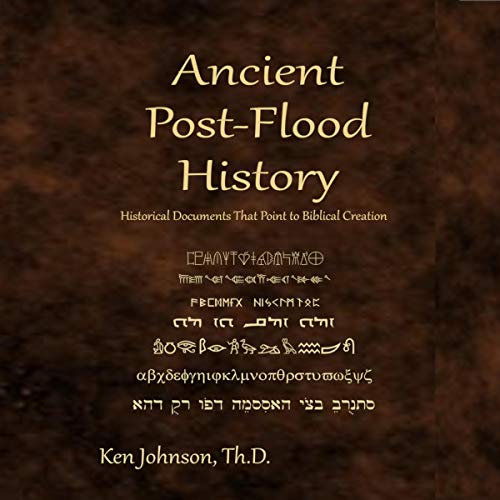 This audiobook is a Christian timeline of ancient post-flood history based on Bible chronology, the early church fathers, and ancient Jewish and secular history. This can be used as a companion guide in the study of creation science. This revised edition adds the background history of nine new countries. Learn the true origins of the countries and people of France, Germany, Denmark, Sweden, Ireland, Scotland, Greece, Italy, Russia, Egypt, Israel, Iraq, Iran, China, the Arabs, the Kurds, and more.

Some questions answered: Who were the pharaohs in the times of Joseph and Moses? When did the famine of Joseph occur? What Egyptian documents mention these? When did the Exodus take place? When did the kings of Egypt start being called "pharaoh", and why? Who was the first king of a united Italy? Who was Zeus, and where was he buried? Where did Shem and Ham rule, and where were they buried? How large was Nimrod's invasion force that set up the Babylonian Empire, and when did this invasion occur? What is Nimrod's name in Persian documents? How can we use this information to witness to unbelievers?

Wow, just wow!! Imagine walking around with someone with encyclopedic knowledge like this in private company. What a treat for a history buff like me. I've done a lot of this kind of study, but nowhere near this. Much respect to the author and the narrator reading all the names from antiquity while keeping it interesting! I'll be listening to this a few more times.

Great Synopsis of the History You Never Heard

What I found interesting about this book mainly was how he researched several different historical records to find a correct lineage and dating for many notable offspring of Noah down to the founding of many countries. Also, he showed how certain "mythical people" were actually real people who were part of the lineage, such as "Odin" and "Jupiter". These "gods" were mere men turned into gods to be worshipped. Of course, maybe some of them also were nephilim, I would not doubt, but it is interesting how people like Saturn literally setup worship unto himself. So these false gods were just men who setup worship to themselves.