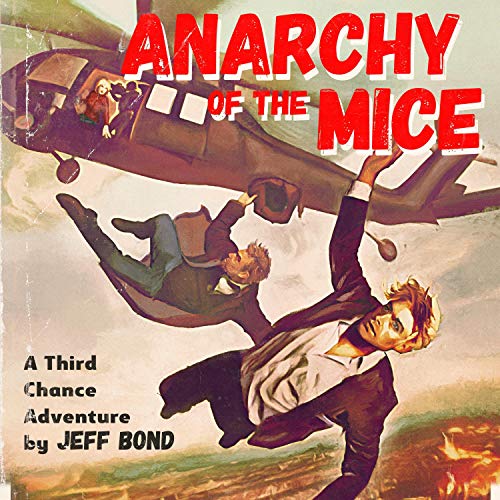 Anarchy of the Mice

From Jeff Bond, author of Blackquest 40 and The Pinebox Vendetta, comes Anarchy of the Mice, book one in an epic new series starring Quaid Rafferty, Durwood Oak Jones, and Molly McGill: the trio of freelance operatives known collectively as Third Chance Enterprises.

How far could society fall without data? Account balances, property lines, government ID records - if it all vanished, if everyone’s scorecard reset to zero, how might the world look?

The Blind Mice are going to show us.

Molly McGill is fighting it. Her teenage son has come downstairs in a T-shirt from these “hacktivists” dominating the news. Her daughter’s bus is canceled - too many stoplights out - and school is in the opposite direction of the temp job she’s supposed to be starting this morning. She is twice-divorced; her PI business, McGill Investigators, is on the rocks; what kind of life is this for a woman a mere 12 credit-hours shy of her PhD?

Then the doorbell rings.

It’s Quaid Rafferty, the charming - but disgraced - former governor of Massachusetts, and his plainspoken partner, Durwood Oak Jones. The guys have an assignment for Molly. It sounds risky, but the pay sure beats switchboard work.

They need her to infiltrate the Blind Mice.

Danger, romance, intrigue, action for miles - whatever you listen to, Anarchy of the Mice is coming for you.

What listeners say about Anarchy of the Mice

This is the first book in the Third Chance Enterprises series, but the second book that I’ve read since Dear Durwood came out first on audio. Anarchy of the Mice was a much longer and drawn out story – but that’s not to say that it wasn’t still full of action and pulp-fiction moment. Just as with Dear Durwood, I love the 5-cent pulp cover of it and it definitely does its best to pay homage to that era of writing while still being a more modern action-adventure book.

I was a bit surprised at the lack of character building in a book this length. I thought for sure that we were going to be introduced and then given some deep back stories on the main group of characters but we really weren’t. That isn’t to say that I couldn’t figure them out and know what made them tick – I was just surprised that devoting this many pages to a book didn’t lead to a ton of character description.

Each character in this book adds something to it and I’m glad that they were all here. They were all easy to root for and follow, while also just being enjoyable when they had scenes where they interacted with anyone.

Now, onto the length. Usually books that are longer like this dive too deep into descriptions of things and repeat points as it goes on, but I did not feel that way with Anarchy of the Mice. Now, would I have enjoyed it a bit more if it was shorter… probably.

Overall, the narration by Jarret Lemaster and Natalie Duke really shined here, the performances were great. The writing was also top notch and definitely fast paced. It was an enjoyable pulp novel that I’m glad I spent the time to enjoy.

This was a fantastic book from start to finish. I loved the characters, the storyline and the pacing. The narrators were able to keep up with the different POVs and brought life to the story

The characters are great, the daily struggles seam relatable.
The work seams setup for both prequals and follow up works.
the performance was done very well with the different view points

I received a free copy of this audiobook in exchange for an unbiased review.