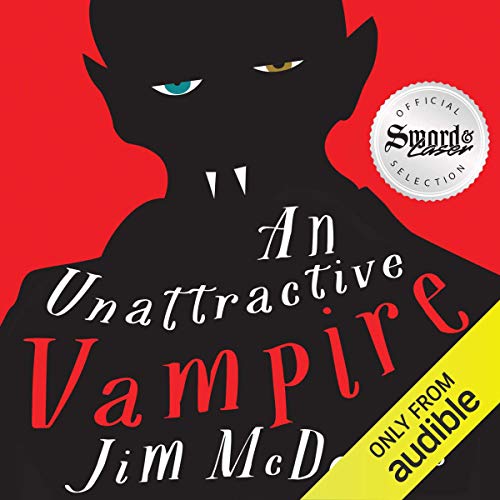 After three centuries trapped underground, thousand-year-old Yulric Bile, also known as The Cursed One, The Devil's Apprentice, He Who Worships the Slumbering Horrors, awakens only to find that no one believes he is a vampire. Apparently he's just too ugly. Modern vampires, he soon discovers, are pretty, weak, and, most disturbing of all, good. Determined to reestablish his bloodstained reign, Yulric sets out to correct this disgusting turn of events or, at the very least, murder the person responsible.

With the help of part-vampire wannabe Amanda; Simon, the eight-year-old reincarnation of his greatest foe; and a cadre of ancient and ugly horrors, Yulric prepares to battle the glamorous undead. But who will win the right to determine, once and for all, what it truly means to be a vampire?

"Jim McDoniel's first novel is quirky, wild, and weird, and definitely for those who hate those sexy vampire stereotypes who like their monsters nice and gross." (Geeks of Doom)

What listeners say about An Unattractive Vampire

Blood, Guts and lots of laughs!

Where does An Unattractive Vampire rank among all the audiobooks you’ve listened to so far?

out of all the books i have read or listened to i cant really put it in a solid rank but with 4.5 being the best i have had the pleasure of reading this would come in at a solid 4.1, the blood and gore with an evil protagonist that gets to see the modern era for the first time had me laughing and staying glued to my book, this is a book that's easy to get lost in and finish in one night.

What other book might you compare An Unattractive Vampire to and why?

if i had to pick one it would be Emperor Mollusk Versus The Sinister Brain, the dark overtones and casual violence while keeping you firmly on the side of evil throughout with constant humor and silly situations, i know that they have stories that are vastly different but i feel a similar tone from them.

Have you listened to any of Drew Campbell’s other performances before? How does this one compare?

this is the first time i have had the chance to hear Drew Campbell as a voice actor, he does a wonderful job bringing the characters alive, his voice for Yulric Bile is now on my list for favorite evil overlords haha.

no, also if there was the scene would be to specific to point to without spoilers.

An Unattractive Vampire is a great book, i had a blast reading it and for all the time i have been on audible this is the first time i have posted a review to maybe get that one more person to give this book a try, here is hoping we have many more great books to come from Jim McDoniel, a fresh and talented voice in a genre filled with books we often feel we have already seen time and time again.

I expected good and got excellent

Not for everyone. The word droll comes to mind. Characters have this droll understated humor, as does the story, topped off by a perfectly done droll narration. Here's a spoiler that's not a spoiler: the good guys are very bad and the bad guys are very good. The sample audio doesn't capture the full package.

Chapter 6 "a history of a haunted house" IS THE FUNNIEST THING IVE EVER HEARD!!!!!

Im going to buy this book again in hard cover... The narrator is super human, I don't know how he can read this without laughing..

You wont regret buying this one.!

A Twist On The Vampire Genre

So unique---I loved the commentary on celebrities, television, nightclubs, perceptions of beauty and ugliness, and attitudes about sex. Wonderful ironic, sardonic humor along with some very different types of characters. All was brought to life (so to speak) by the extraordinary narration of Drew Campbell, one of the best performances I've heard on Audible. His wonderful proper British matter-of-fact delivery at times had me laughing out loud.
If I had to choose a favorite scene, it would definitely be Yulric watching television for the first time and becoming totally mesmerized. Which reminds me about all the hilarious commentary on peoples' obsession with celebrities and TV shows. I wish I could remember exactly how it went, but it was something like beautiful doctors having sex with beautiful doctors and beautiful lawyers having sex with beautiful lawyers.
Loved all the characters especially the strong-willed Amanda and of course, Yulric Bile. What a great name!
Here's hoping, hoping that there will be a sequel.

loved it, hoping for book 2,

light funny well written and well performed. loved the positive portrayal of strong females, and the antics of simon. i hope to see more from this Author.

Hilarious book! This is a totally different take on vampire stories and it is actually very good. It is in no way romantic, but extremely entertaining. Well written, great character development, and the narrator was fantastic. Totally worth the credit!

Very off beat, but quite entertaining.

This is a popcorn title, but thoroughly entertaining and tongue in the cheek. Quite enjoyed the understated wit and chuckles.

A fun, fresh and satirical look at the difference of perception of vampires from blood thirsty monsters of nightmare to glittery tragic antiheros. If you're the type of person to root for the villains than this book is definitely for you.

This book was delightfully witty and easy to finish. It's a light "read," but those are often the best audio books. Funny, not very predictable, and original.

The story and the narration were very well done.
It reminded me of Neil gaimans book Good Omens.