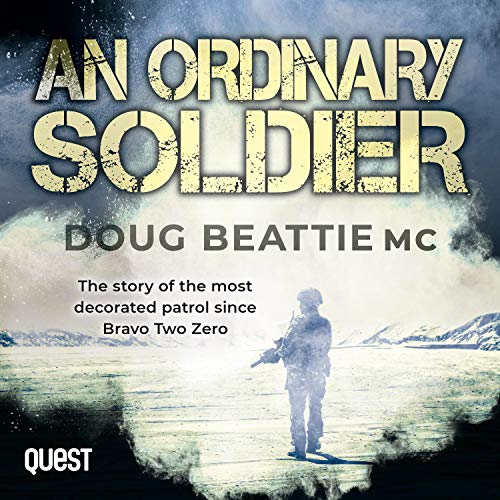 An Ordinary Soldier offers an extraordinary insight into the mission in Afghanistan and, crucially, the relationship between British troops and the Afghans they serve alongside.

On 11th September 2006 - five years after the attacks on the Twin Towers - a modern day Rorke's Drift was played out in the town of Garmsir, known as the Taliban gateway to Helmand Province. 40-year-old Capt. Doug Beattie of the 1st Battalion Royal Irish Regiment was charged with the mission to help retake Garmsir from the Taliban. His commanders said it would take two days; it actually took two weeks of exhausting, bloody conflict. For his repeated bravery Doug Beattie was decorated with the Military Cross. This is Beattie's personal story of being what he modestly calls 'an ordinary soldier' - someone who balances being a loving father and husband with that of fighting in the world's most hostile place. It demands to be heard.

What listeners say about An Ordinary Soldier

Doug Beatie MC may have written this book to decompress, what he has created though is a modern military classic about the life of an extraordinary soldier.

This a great real life story from one of my countrymen! If anyone thought it was a walk in the park in Afghanistan this will dispel that idea! A blow by blow account of just one mission in the campaign from a first hand view! Thanks for your service Doug and a well earned MC!

Enjoyable, despite the narration.

A great depiction of the events of Garmsir. I was a little disappointed by the narration, he spelt out all the acronyms every time i.e J.T.A.C hill, instead of JAYTAC hill. I would have felt more connected to the content had it been narrated by Doug.