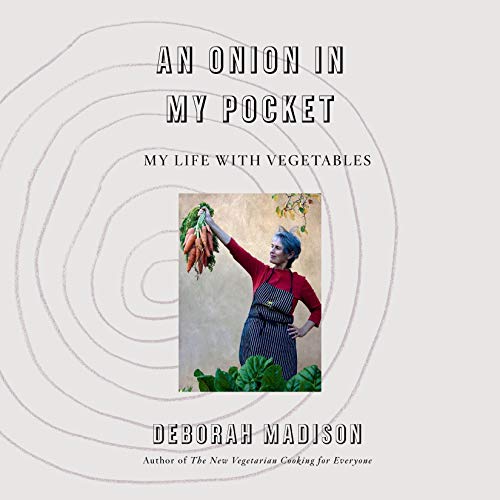 An Onion in My Pocket

From the author of Vegetarian Cooking for Everyone ("The Queen of Greens", The Washington Post) - a warm, bracingly honest memoir that also gives us an insider's look at the vegetarian movement.

Madison’s “insightful memoir” (The Wall Street Journal) is “a true delight to read as she uncovers her love for all real foods, peeling off layer by layer like an onion, recounting her own personal, culinary, and gardening experiences” (Lidia Bastianich).

Thanks to her beloved cookbooks and groundbreaking work as the chef at Greens Restaurant in San Francisco, Deborah Madison, though not a vegetarian herself, has long been revered as this country's leading authority on vegetables.

She profoundly changed the way generations of Americans think about cooking with vegetables, helping to transform "vegetarian" from a dirty word into a mainstream way of eating. But before she became a household name, Madison spent almost twenty years as an ordained Buddhist priest, coming of age in the midst of counterculture San Francisco. In this charmingly intimate and refreshingly frank memoir, she tells her story - and with it the story of the vegetarian movement—or the very first time.

From her childhood in Big Ag Northern California to working in the kitchen of the then-new Chez Panisse, and from the birth of food TV to the age of green markets everywhere, An Onion in My Pocket is as much the story of the evolution of American foodways as it is the memoir of the woman at the forefront. It is a deeply personal look at the rise of vegetable-forward cooking, and a manifesto for how to eat well.

“I love vegetables; hence, I have always felt a kindred spirit, and enjoyed reading and cooking from Deborah’s books. An Onion in My Pocket is a true delight to read as she uncovers her love for all real foods, peeling off layer by layer like an onion, recounting her own personal, culinary, and gardening experiences, and her adventures with family and friends. It’s a most timely book and a joy to read.” (Lidia Bastianich)

“I dare you to cut into any part of this edible memoir and not eat the whole thing in one ravenous gulp. To eat Deborah's words as she serves them up is to feast on food, life, love, art, beauty, purpose, and possibility. She unfolds her story with the sweet freshness and pungency of the onion in her pocket she has garnered from the world's markets to share here and now with us.” (Betty Fussell, writer, food historian, and author of Eat, Live, Love, Die: Selected Essays)

“I came to S. F. Zen Center in 1974 and Deborah Madison was a senior student, with a standing that made a new student like me flinch by her in the hall, eyes averted. I felt like she was breaking trail for me then, and she continues to this day. Her food is tantalizing and nourishing, and her prose is breezy, lucid and as beautiful as her presentations on the plate. I’ve got all her cookbooks tagged and ear-marked, stained from constant use, and I’ll devour this new one like a tasty sandwich after a hard morning’s work.” (Peter Coyote, Zen priest, actor, author of Sleeping Where I Fall and The Rainman’s Third Cure)

What listeners say about An Onion in My Pocket

Deborah’s book detailing her life story is fascinating. I learned so much about the evolution of vegetarian cooking, the restaurant business, and farmers’ markets, to name a few. What made it extra special was the narration by Deborah Madison herself. Every thought and experience is beautifully articulated. She speaks as if talking to the listener personally. Having lived in California and even briefly in Davis, roughly the same time Deborah did, made the book even more relatable. Can’t rate this book high enough. I will definitely be trying more of her recipes.

A little hard to listen to

I love Deborah Madison and have lots of her cookbooks. Her vegetable soup cookbook is one in which I have made almost every recipe and I depend on Vegetarian Cooking for Everyone. But I am having trouble listening to this book.

While listening, I am appreciating the many excellent readers I have listened to over the years. Madison seems to have a passing relationship with the letter "t" and it is often slurred into the end of the word or the beginning of the next word, making it difficult just to enjoy the book because I have to keep asking myself, "What did she just say?" because she would speak "Wha..did she jus..say."

I wish a trained reader had been chosen to read this book for us.

What a fun and interesting read. I bought the hardcover for my son for Christmas but really didn't want to wait for him to finish it so I did it my listening to it. Fun, fun listen

What a surprise after all these years and all the cookbooks I have by Deborah Madison and never knew how interesting and surprising is her life story. Thoroughly enjoyed the memoir and love and respect her all the more!